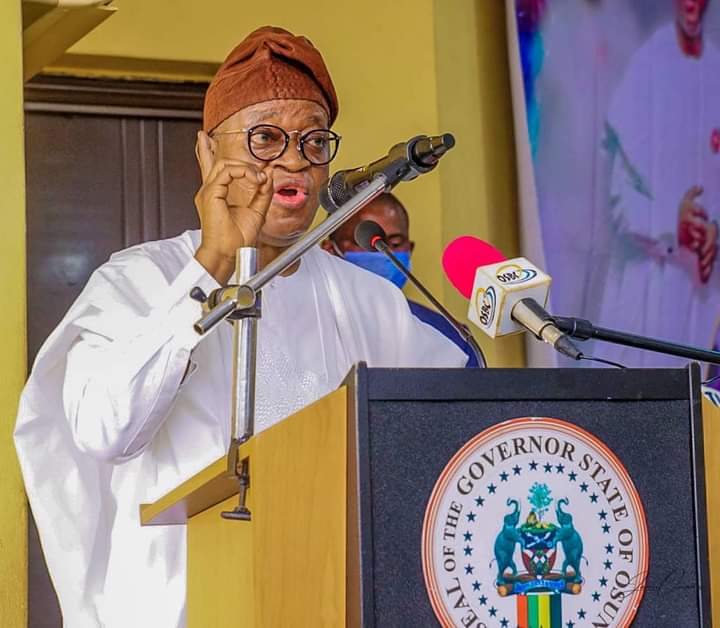 …Says All Recorded Gains So Far’ll Never Be Reversed

…As NULGE Endorses Gov For Re-election

Workers in Osun State for the second time in less than three months on Thursday openly supported Governor Adegboyega Oyetola for second term, ahead of next year’s governorship contest.

The workers, numbering over 10,000 under the auspices of Nigeria Union of Local Government Employees, NULGE, noted that a governor who stopped paying half salary, who lifted ban on their promotions and conversions after several years, who gave them minimum wage without agitation and who has continued to pay full salaries, despite the challenging economic situation in the country, deserves a show of appreciation from the workers in the state; and the only way to appreciate such governor was to ensure his re-election come July, next year. The workers made all these known during a meeting the newly elected NULGE executives, council managers and Heads of Departments in Local Governments, Local Council Development Areas and Area Offices, held with the governor at the Muti-Purpose Hall of the Local Government Civil Service Commission, State Secretariat, Abere.

Recall that the Nigeria Labour Congress, NLC, Trade Union Congress, TUC, and the Joint Negotiation Council, JNC, had on May 1, openly endorsed Oyetola for another term. Although Wednesday’s event was a NULGE affair, all leaders of the three labour unions in the state were on hand to lend their support, with the NLC chairman, Comrade Jacob Adekomi, seizing the occasion to tell the gathering to shun insinuations that the governor would go back to half salary after returning for a second term.

Adekomi held that with the landmark Supreme Court’s judgement, workers have the right to be partisan, saying “Oyetola remains our candidate as far as next year’s election is concerned. If he wants to go back to half salary, now is the time to do so, because some states have cut down salaries of workers. This man is God-sent, he won’t change.”

This is even as Governor Oyetola has said that he would continue to govern the state with the utmost fear of God, and that contrary to insinuations, all the gains so far recorded would never be reversed.

He said that the welfare of workers and other citizens of the state are of topmost priority to him and his administration, adding that the show of love to him by the workers has rekindled his hope in the project called Osun, adding that he would do everything to take the state to greater heights.

Waxing religious, Oyetola further said, “This government is defined and ordained by God. When we say we want to do something, we do it by the inspiration of God. During the electioneering, when I promised to be paying full salaries, nobody believed it and today it’s a reality, because God has helped us to be able to pay full salaries.

“This is my first time of seeing highly-intelligent and serious civil servants showing their declaration openly and I am highly impressed. Today is a day of joy and I see sincerity of purpose, I see joy radiating on people’s faces, it’s amazing to see that our partnership is working.

“We are all partners in Project Osun. God only made me the driver and I am committed. I thank you for this show of love and the extent to which you have endorsed me, even though it is not yet time. I thank you for this show of love. For it has rekindled my hope in Project Osun and together we are going to take the state to greater heights. This is just the beginning and our state will continue to be reckoned with in the comity states in Nigeria.”

Speaking earlier, the state President of NULGE, Comrade Nathaniel Kehinde Ogungbangbe, who lauded the governor for his role in resolving the crisis that plagued the union at the national level, noted that the union had experienced turbulent and hectic times in the last two years, which the union hopes will never happen again in its history.

Describing Oyetola’s intervention in the crisis, which resulted in ruins and losses valued at N2 billion, as both timely and helpful, Ogungbangbe
described Oyetola as a tested and trusted leader, even as he called on workers and citizens to be wary of changing a winning formation to avoid disastrous outcomes.

He added, “We are irrevocably committed to your re-election. On your mandate 4+4, we stand!”

The Head of Service, HoS, Dr. Festus Olowogboyega Oyebade, also lauded Governor Oyetola for his peaceful intervention in the national crisis of NULGE, which has transformed the fortune of the union for good.

The HoS said, “In the history of our union since 1991, this is the second time our members will wear a uniform to celebrate a sitting governor, who is deserving of plaudits. He gave us double promotion, full salary, increment and minimum wage without any agitation or protest. “For those wrong reasons, we lost more than N2 billion at the national level to the crisis that plagued the union. Apart from losing money, we lost our National President.

“Mr Governor, I want to say that with your timely intervention, peace has been restored to our union, and we now have a National President.

“Our governor served as a redeemer, a beacon of hope and progress, not only to Osun, but to the nation as a whole, and that is why we are here to celebrate peace, joy and blessing of a great leader.”

On his part, the Chairman, Forum of Council Managers, Prince Adewale Adedapo, pointed out that since the assumption of office of Oyetola three years ago, he is known to have shown passion and good intention of transforming the life of all citizens, including the officers of the public service.

He added, “We are equally pledging our dedication to duty, with a view to improving internally generated revenue, IGR, of our various councils. All the entire local government workforce unanimously declare support for your second term.”