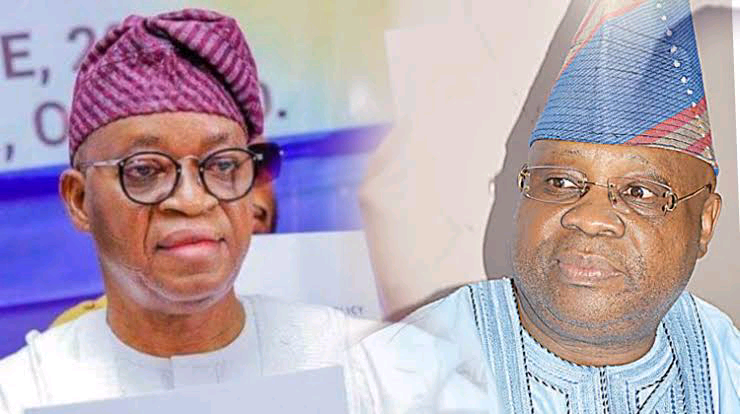 The Osun State Election Petition Tribunal hearing the suit filed by the governor of the state, Adegboyega Oyetola, has admitted documentary evidences lending credence to the claim that the results of the gubernatorial election, leading to the declaration of the candidate of the People’s Democratic Party, PDP, Ademola Adeleke as governor-elect was manipulated.

Among the documents admitted in evidence by the tribunal on Tuesday, November 1, were: the INEC Regulation and Guideline for the election, INEC Manual for Electoral Officials, Forms EC8As, which are election results for Osogbo, Ede North and Ede South local government areas, among others.

The plaintiff’s counsel, Chief Lateef Fagbemi, SAN, informed the tribunal that the documentary evidences he sought to tendered had been cross-checked by the respondents, adding that they all agreed that it should be tendered from the bar.

He then sought to leave of the tribunal to tender the documents, as listed on the schedule already submitted to the tribunal.

But INEC’s counsel, Ananaba, subsequently raised an objection to all the documents, which had already been certified by the Commission.

Surprised by the objection, one of the judges queried, “You are raising objection even to your regulations?”

Responding, Ananaba insisted on objecting to all the documents as listed in the schedule, hunting that he would give reasons for his objection in the final written address.

Adelek and PDP counsel, Onyeachi Ikpeazu, SAN, and Alex Izinyon, SAN, respectively, also objected to the admissibility of the evidence, ASLO indicating that they would also give reasons for their objections in their final addresses.

Responding to their objections, Fagbemi sought to tender another evidence which contained the ‘Schedule of the Documents’ to be tendered, but Ananaba again objected on the grounds that it was never pleaded.

Surprised again, the tribunal Chairman, Justice Tertsea Kume, queried the INEC counsel and referred to his record, where the counsel informed the court that he had cross-checked the schedule of documents and had no objection.

Based on the chairman observation, the INEC counsel withdrew his objection, just as Adeleke and PDP’s counsel raised no objection to the tendering of the documents.

In its ruling, the tribunal admitted in evidence all the documents tendered and marked them as exhibits.