The Arole Oduduwa Olofin Adimula and the oarmaoynt ruler of the cradle of the Yoruba race, the Ooni of Ife, His Imperial Majesty, Ooni Adeyeye Enitan Ogunwusi, Ojaja II, has been awarded the ‘Royal Father of the Largest Black Nation’ by the National Youth Council of Nigeria, NYCN.

A statement signed by the Director of Media and Public Affairs of the Ooni Palace, Comrade Moses Olafare and made available to journalists stated that the honour was bestowed on the Ooni, who doubles as the Co-chairman, National Council of Traditional Rulers of Nigeria, NCTRN, on Tuesday during the extra-elective congress of the NYCN, which held at the Calabar Municipal Government Headquarters, Calabar, Cross River State.

At the congress with the theme: ‘Harmonization for Unity and Progress,’ Ooni Ogunwusi reiterated his commitment to youth development and nation building. 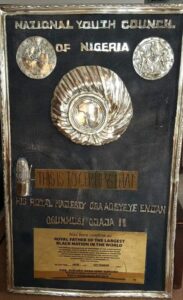 Represented by two notable Yoruba traditional rulers; the Oore of Otun-Ekiti, Oba Adekunle Adeagbo and the Alapomu of Apomu Kingdom, Oba Kayode Adenekan Afolabi, Ooni Ogunwusi explained that his decision to dedicate the ancient throne of Oduduwa to youth emancipation, is to give the needed mentorship to the youth towards prosperity.

Speaking, the Pore of Ogun Ekiti, Oba Adeagbo said, “When he (the Ooni) hosted you last year, he promised to open up doors of opportunities for you and even bring down barriers militating against your growth. A careful look at the beautiful promise shows that Baba (the Ooni) has done a lot.

“Aside from those he (the Ooni) has been doing in the private to ensure that Nigerian youths are well placed in the society, particularly towards attaining leadership positions nationwide, I am sure you all are aware of the security summit held recently in Abuja, where the Ooni emphatically called for massive youth inclusion.” 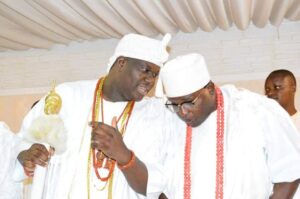 Also speaking, the Alapomu of Apomu,Oba Afolabi explained that the appointment would further motivate the Ooni to do more in his services to the country through the youth.

He said, “You have just done well by sending loads of appreciation to Baba (the Ooni) through this appointment and I am sure he won’t let you down.

“All that the Ooni is asking of you is unity, willingness to sacrifice for the growth of Nigeria and consistency. With these, I am confident that immeasurable successes would be recorded, going further.”

Earlier in his address, the Minister of Youth and Sports Development, Mr. Sunday Dare, described the Ooni as a unique gift given to Nigeria by God Almighty. 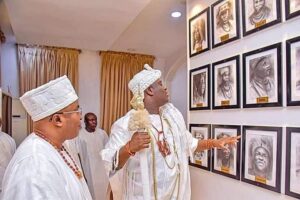 Represented by the Director of Network and Social Mobilization Department, Federal Ministry of Youths and Sports Development, Amina Muhd Dauran, the minister urged the Ooni not to relent in his efforts towards towards emancipating the Nigerian youth.

He said, “The Ooni has come at a time when the country needs efficient leadership and a strong unifying force in this trying time of our country. We pray that the Almighty God grants him a healthy long life to fulfill all the goodness in his heart.”

While presenting the award on behalf of other members of the NYCN, the council’s president, Amb Sukubo Saraigbe Sukubo, explained that the honour is beyond mere award, as it has been gazetted that the Ooni is the NYCN’s life patron.

He said, “It was enshrined in the constitution of the National Youth Council of Nigeria, NYCN, because of the Ooni’s disposition towards the Nigerian youths, which he has consistently demonstrated over the years and this award is the highest award being given to a traditional ruler in Nigeria.

“We are proud to announce our father, the Ooni to the entire world, this is a message that the Ooni, who we have recognized, should be respected maximally across the world, we know he has the heart of the young people and we are proud to be associated with him for life.”

Recall that the African foremost monarch, who is the natural leader of the entire Oduduwa race worldwide, had home into the customary seven-day seclusion last Sunday to kick-start the activities for this year’s edition of the Annual Olojo Festival, billed to hold this weekend.