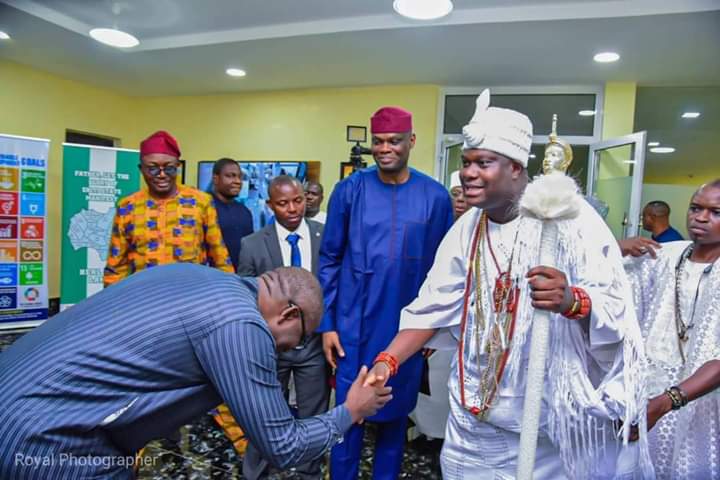 The Arole Oodua and Ooni of Ife, Ooni Adeyeye Enitan Ogunwusi, has embraced the tourism development vision of the Ekiti State governor, Dr. Kayode Fayemi, promising the readiness of the House Oduduwa to reinforce and fully support the governor toward the advancement of Ekiti people, using tourism as veritable tool for economic growth.

A statement signed by the Director, Media and Public Affairs in the Ooni’s Palace, Comrade Moses Olafare, said that Ooni Ogunwusi, who is one of the biggest investors in the hospitality sector in Nigeria, gave this assurance in his palace at Ile Ife, while receiving in audience the Senior Special Assistant to Governor Fayemi on Tourism Development, Ambassador Wale Ojo – Lanre

Ambassador Ojo – Lanre, who recounted several tourism moves, deeds and acts of Ooni Ogunwusi, which have turned Ile – Ife into a destination of choice and his intercontinental odyssey, which have cultivated goodwill and shored up the profile of Nigeria in the comity of tourism nation, implored the Ooni to spread the tentacles of his tourism aura to Ekiti State

Disclosing that Governor Fayemi’s tourism vision is predicated on pro-people, pro- empowerment, pro-development, pro – employment creation and pro – wealth stimulation for the government and the ordinary people of Ekiti State, which the Ooni has injected into Osun State, Ambassador Ojo – Lanre revealed that Governor Fayemi had during his first term raised the banner of tourism development in Ekiti State beyond expectation by the creation of an eldorado out of the hitherto neglected Ikogosi Warm Spring Resort; enhancement of Arinta Waterfall, Ipole Iloro; processing Ogun Grove for UNESCO World Heritage Site; declaration of Efon – Ipole – Ikogosi – Erinjiyan – Ilawe as Ekiti Tourism Corridor; enhancement of the entry posts of Ekiti State; and Ero Dam Waterfront Tourism Resort; projects which had suffered odious neglect at the hand of the immediate past administration which has no interest in the sector

He pointed out that the parlous state of these sites and the fact that Governor Fayemi is a cosmopolitan person who understands the import of a blossom tourism sector has necessitated the resetting of the sector for sustainable productivity and vibrancy that will ensure continuity.

Lanre – Ojo lauded the Arole Oodua, Ooni Ogunwusi, who is co-chairman, National Council Of Traditional Rulers of Nigeria, NCTRN, for his pro-activeness at combating the spread of COVID-19 by donating two of his locally fabricated motorized modular fumigators to each of the 36 states of rhe federation and the Federal Capital Territory, FCT.

Africa’s foremost monarch, who prayed for Ambassador Ojo – Lanre to succeed in his new assignment, also eulogised him for his passion at ensuring that tourism is given its needed attention by the Federal Government, even as the Ooni also described Governor Fayemi as a philosopher leader, who thinks, acts and responds to issues with the calmness of divinity, and an asset to the nation and the world

The Spiritual Leader of the entire Oduduwa Race worldwide declared that he would not only support the development of the tourism assets of Ekiti State, but would also visit some of the sites; revealing that he has the vision and mission to add value to 50 cultural-tourism sites in Yoruba land.