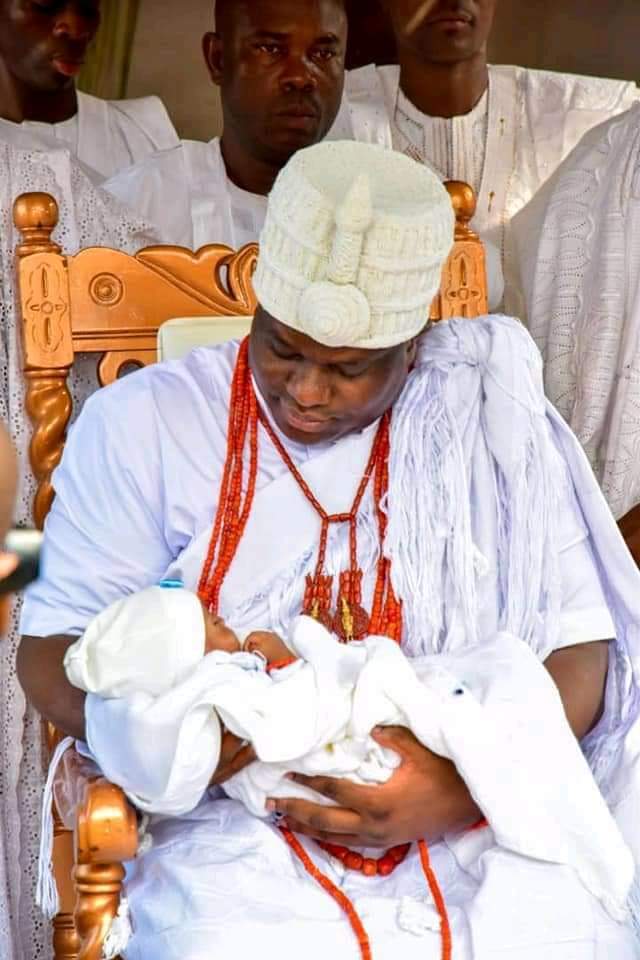 A release signed by the Director, Media and Public Affairs, Ooni’s Palace, Comrade Moses Olafare, and made available to the media stated that the prince came in a motorcade to the entrance (Enu Geru) of the palace, where he was received by the Agba Ife, led by Obalufe of Ife, Oba Idowu Adediwura, the Modewa, led by Lowa Adimula of Ife, High-Chief Adeola Adeyeye and Emeses, led by Sarun Oriowo Oyeyemi. 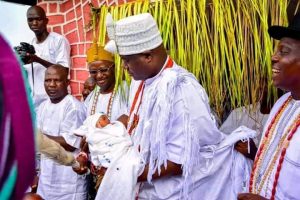 The statement added that they all ushered the prince and his mother, Queen ShilekunOla Ogunwusi (YEYELUWA), the families, friends and associates from Akure into the Ooni’s Palace.

It was recorded that the prince and his mother first stopped at Ile-Nla, within the palace courtyard, where the families and relatives of the Ogunwusi Royal House and friends were awaiting the arrival of the baby; from where they proceeded to Emese’s court, where the prince was finally handed over to his joyful father, Ooni Ogunwusi, who came out through the sacred Ile Igbo, in accordance to the full culture and traditions of Ile-Ife, as always observed whenever a reigning Ooni receives his newly born prince into the palace, after the necessary rites of 21 days. 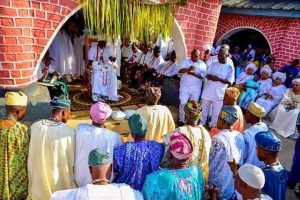 After receiving his son from the mother, Ooni Ogunwusi, accompanied by relevant spiritual aides, swiftly took the baby straight into the inner chamber of Ile Igbo, for the necessary spiritual confirmation to establish the blood lineage of Oduduwa, following the footsteps of his ancestors. 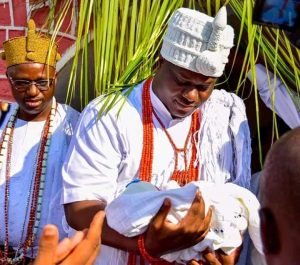 The monarch later came out from Ile Igbo with smiles and majestic dance steps welcomed by thunderous shouts of “Kabiyesi ooooo!” “Kabiyesi oooooo!” from the waiting crowd, who watched with excitements and jubilations as the Ooni handed over the prince to his elated mother, who danced with the baby in her hands to her apartment at the palace.

The Ooni’s Palace was full of activities, as various people across the country came in droves to witness the grand entry of the prince and the subsequent handing over of the crown prince to the joyous father, who was seeing him for the first time since he was born three weeks ago. 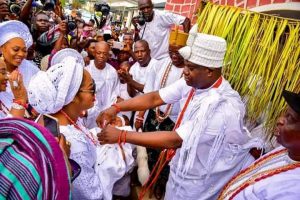 Recall that the palace of the Ooni of Ife, had two weeks ago, during the eight-day naming ceremony announced that it would not release the facial identity of the prince to the public until after the mandated 21 days, in line with the cultural legacy established by Oduduwa Olofin Adimula several centuries ago.