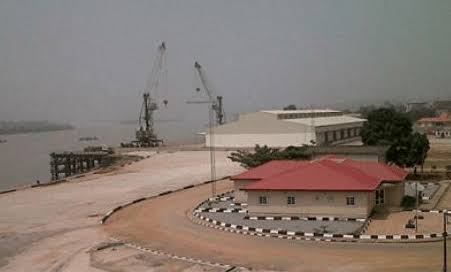 Contrary to news making the rounds in the social media, insinuating that Onitsha Inland Port has commenced full operation, Maersk shipping company has debunk that the port is fully operational

The news had broken out early Wednesday morning, as a picture of the dockyard, being commissioned, and shipment schedule from Maersk showing China – Onitsha destination surfaced online.

Series of tweets praising the development followed, as many others joined the preaching.

“So Onitsha Port was commissioned yesterday & you can now send a container from China to Onitsha without going through Lagos? And some of have been using it for months but kept quiet? Why do people refuse to talk when good things happen in Nigeria,” Dr Joe Abah wrote.

However, responding to an inquiry about their operations in Onitsha Inland Port, Maersk said in an email to Tekedia that the news has been inaccurate.

Speaking through its African Communication Manager, Kerry Rosser, Maersk said, “We do however offer a through bill product for our customers in which cargo discharged at Onne is trucked to the Clarion Depot in Onitsha, which is roughly opposite the Niger River.”

The Onitsha Inland Port was rehabilitated and commissioned in 2012, with a view to accommodate vessels and ease Lagos Ports of congestion. But the port is yet to commence full operation since then.

Last month, the National Inland Waterways Authority, NIWA, said the commencement of shipping operations is targeted at the first quarter of 2021.

NIWA’s Area Manager at Onitsha Area Office, Mrs. Queen Uba, said operations at the port have been on hold due to the ongoing concession process, but NIWA is ready for its operations as soon as the process is complete.

Onitsha Inland Port was built under the administration of President Shehu Shagari in 1983 and since then, it has been lying fallow and completely under-utilized until 2012, when it was rehabilitated and commissioned by former President Goodluck Jonathan.

It is hoped that NIWA will live up to the challenge and facilitate shipping operations in the port that will spur its activities beyond a clarion depot for trucking cargoes.