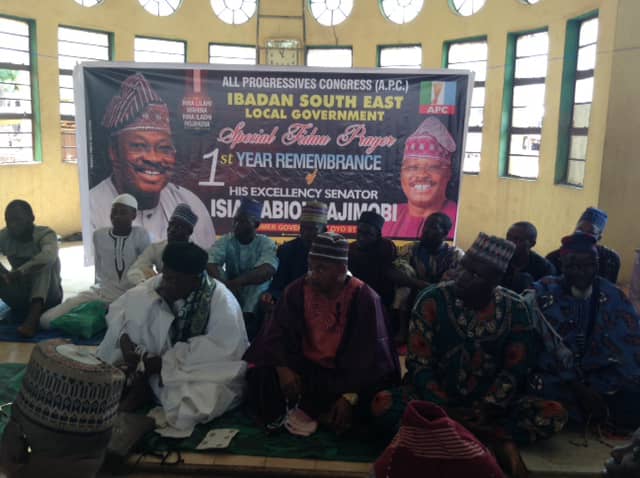 The All Progressives Congress, APC, in Ibadan South East Local Government Area of Oyo State on Sunday, held a special firdaous prayer for the repose of the soul of former governor of the state, Senator Isiaq Abiola Ajimobi, who passed away about a year ago.

The Special Firdaous Prayer, which was attended by hundreds of admirers and supporters of the former governor, held at Olorunsogo Central Mosque, Olorunsogo, Ibadan, the Oyo State capital.

Highlight of the event was the recital of special Quranic verses for the repose of the soul of the departed and the family he left behind by many present.

Delivering a special sermon at the event, an Islamic scholar, Sheikh Abdul Mojeed Agbaje, commended the former governor of Oyo state, Senator Ajimobi for his outstanding perfotmance while in office.

Agbaje said that the late governor served the state and improved the lives of the people.

Recalling how Senator Ajimobi constructed roads, improved infrastructure, health care service delivery and ensured that the transport union in the state were properly coordinated peacefully, Agbaje explained that the late Ajimobi’s immense contributions will no doubt be remembered by all.

He urged party faithful to work in love ahead of the party congress and the 2023 general elections, expressing optimism that who ever the party presents during the elections will emerge victorious insha Allah.

Special prayers were also said for the success of the APC in Oyo State in particular and nationally,ahead of the party’s ward, local government and state congresses and national convention.

On why the programme was organized by the Ibadan East Local Government Area chapter of the APC, the former caretaker chairman of the local government, Abass, in a chat with newsmen after the programme said, “The late Ajimobi was a son of the soil of Ibadan East Local Government, and our leaders deemed it fit that we should organize a special prayer for him, because he is our son.

“We really miss him, especially those of us who were close to him. As a former caretaker chairman, I had much rapport with him and I was very close to him, just like some others who are present today.

“Had it been he is alive, and with the situation of things in Oyo State and I adan in particular, he would have risen to the occasion. He was well exposed and he brought his exposure and wealth of experience in the private sector to bear on governance when he was governor. For example when the security situation in Oyo State 2as getting out of hand, he created ‘Ooeration Burst’ to combat it frontally.”

Asked to assess the performance of incumbent Governor Seyi Makinde, Alhaji Abass said that assessing anyone in public office wish the responsibility o the general public, noting that everyone in Oyo State is witness to what the people are saying about the present government.

He noted that if someone is performing and one says he is not performing, everybody will see it, insisting, “But as of today, if there is no peace, nothing tangible can be achieved. We all in Oyo State can no longer sleep with our two eyes closed. As far as I’m concerned, Governor Makinde in doing all he can according to his capacity.”

Others were: Hon Shakiru Fagunwa, Hon Murisiku Oladimeji, chairmen, women leaders and youth leaders of all the wards in the local government.