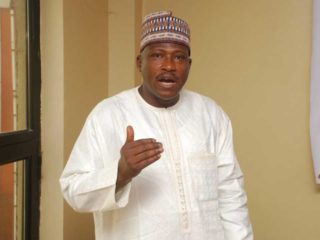 Senior Special Assistant, SSA, on Tourism Development to the Ekiti State governor, Ambassador Wale Ojo-Lanre has lamented the sudden death of the National President of Federation of Tourism Association Nigeria, FTAN, Alhaji Saleh Rabo Kareem, describing his exit as the fall of a giant star in Nigeria’s tourism firmament

Ojo-Lanre stated this in a condolence letter to the Vice President, FTAN, South-West, Otunba Ayo Olumoko, saying, said “I am shocked to the marrows by the sad news of the demise of Alhaji Saleh Rabo Kareem, who was until the tragic incident the President, Federation of Tourism Associations of Nigeria, FTAN.

“His death could be described as the fall of a giant star from Nigeria’s tourism firmament, whose accomplishments and legacies will remain indelible in the history of FTAN.”

Disclosing that the death of the FTAN President “is not only a corporate tragedy, but a personal loss,” Ojo-Lanre said, “Our relationship is dated to the late 1990s, when he was the young manager of All-State Travels, owned by Alhaji Munzali Dantata, with an office at the NICON HILTON Hotel, then.”

The SSA described the late Alhaji Rabo as a “diligent and ultra-loyal staff of All States Travel, who always ensured our comfort are sort after whenever I accompanied Ogbeni Tope Awe to visit Alhaji Munsali Dantata, who was planting a resort opposite the Zuma Rock in Niger State.

“This relationship was affectionately oiled when I was retained as the Public Relations Officer for FTAN after the end of Dr Goodie Ibru’s tenure as FTAN President and the ushering in of Alhaji Dantata, who organized the first successful FTAN National Awards, based on merits and unquestionable accomplishments in the sector.

“Alhaji Rabo stooped to conquer. He confounded many with his intellectual direction and quest for professionalism and credibility, which he injected into FTAN. He successfully piloted the affairs of FTAN gloriously for a two-term, tenure despite the initial scepticism of some cynics.”

Ojo-Lanre affirmed that “Alhaji Rabo did his best. He served FTAN with all his strength, energy and ability. Though his death is a vital blow to the tourism sector, the memorable part of his story is that he served FTAN genuinely, without an iota of unwholesome controversy.”

Consoling the family, Ambassador Ojo-Lanre said, “My empathy goes to his immediate family, who I pray to Almighty Allah, the most beneficent and the most merciful, to have mercy on them and comfort their souls.”

Consoling with FTAN, he said, “To our FTAN colleagues, in particular, I know you are bereaved, accept my mournful sympathy. To Nigeria and the tourism sector in general, let us pray to Allah to forgive him his sins and accept him into Aljaena firdaus.