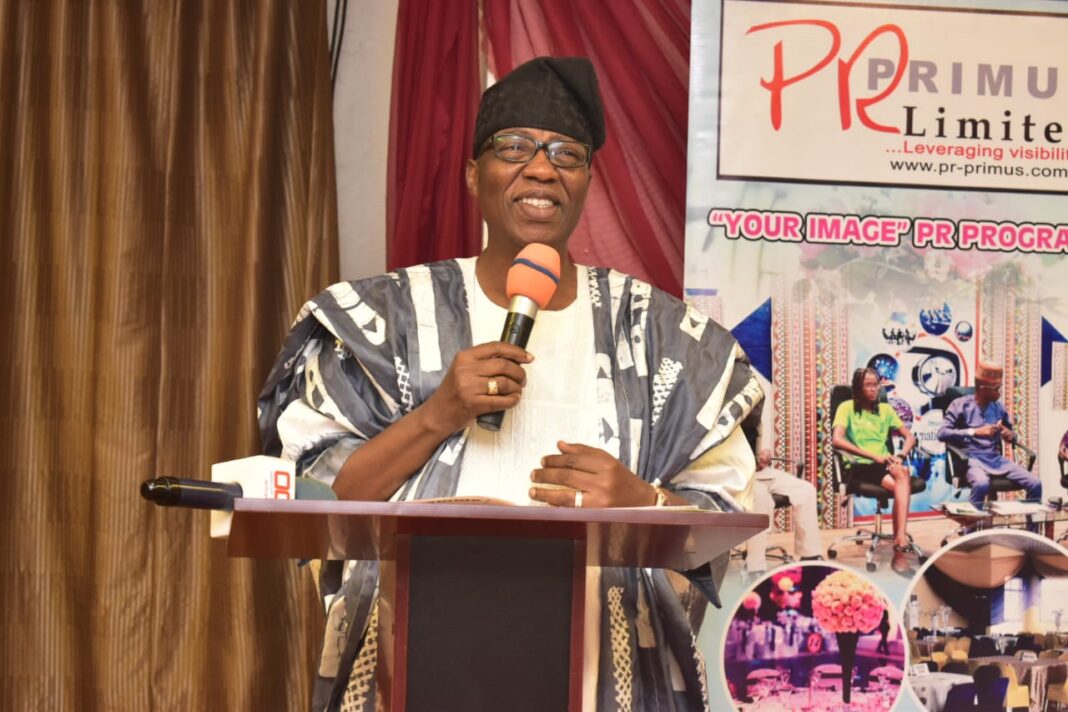 Speaking at the Image Award ceremony, organised by the Ogun State chapter of the Nigerian Institute of Public Relations, NIPR, in conjunction with PR Primus Limited, themed: “Turning Around the Nation: The Leadership Question,” OGD as he is fondly called by his admirers, appreciated all PR practitioners for their contributions to the development of the profession and the nation in general, stating that perception and public issues are very important to the development or otherwise of any nation.

Daniel, who is the Patron of Ogun State NIPR, and chairman of the occasion, noted that whereas the western world, using the potent tools of public relations and media will never project to the world “that they have ghettos with them,” and other eye-sore and image denting pictures, “but here in Nigeria and Africa we do so at will, using the media and public relations tools.”

He explained that this is the reason why the western world is looking down on us, illtreating us and qualifying us with all manners of adjectives that are demeaning.

Lending credence to the virtual lecture delivered the President of Public Relations Practitioners in Africa, Mr.Yomi Okubadejo, the publisher of the defunct Nigerian Compass newspapers and Westerner Magazine urge PR practitioners and newsmen to apply human face to their profession by being patriotic in their dissemination of information about Nigeria to the world in order to restore the image of the country.

Daniel, who clarified that he’s not saying that PR and media practitioners should not mirror and reflect the other side of the country, pointed out that it shouldnt be purgent, adding that it should be sparingly.

He implored administrators and stakeholders to put utmost importance on the profession and try as much as possible to spend more money on it, saying that no money is too much to spend on public relations, because perception often reflects reality.

He said, “Africans are faced with big issues because of the way it is presented to the world, whereas we can avoid such if the wrong sides were not projected.”

He reaffirmed, “If you properly present a situation that ordinarily looks bad, people will end up seeing the good side of it. Africans are faced with big issues because we are not properly presented to the world, which could have been avoided if the wrong sides were not presented.”

In his welcome address, the Managing Director/CEO PR Primus Limited, Mr. Akin Okudero, described PR as a pivotal to the growth and development of not only organizations, but communities, groups, the nation and the world at large.

He stressed that PR adds value through increasing visibilities of products or services, reputation, assist sales process and add value to clients, adding that PR Primus has done that in the last eight years.

According to him, “a nation that deploys PR and strategic communication in the governance of her people, builds bridges of peace and development.”

Speaking on the experience of PR Primus over the years, Mr. Okudero disclosed that the organisation has been able to promote PR through the establishment of “Your Image” PR Programme on Ogun State Television and by extension, the PR Primus Magazine.

He however appreciated the efforts and contributions of the Federal University of Agriculture, Abeokuta, FUNAAB; Crescent University, Abeokuta, and the Nigerian Customs Service, NCS, among many others, noting that despite the various challenges, God’s grace and the supports from various well meaning people have been able to sustain them.

Meanwhile, the President and Chairman, Governing Council, NIPR, Mallam Mukhtar Zubair Sirajo, reiterated the commitment of the institute to continous building of sustainable peace, trust and harmony in the Nigerian polity, disclosing that the institute recently embarked on an advocacy to uplift confidence of Nigerians in their leaders by holding them, especially political leaders, accountable to their responsibilities.

He stressed that NIPR will continue to preach love, good neighbourliness and performance to rebuild trust amongst the federating units, stating that the institute hopes that once trust and understanding is built in the midst of political, ethnic and religious differences, Nigeria would be on the fast lane of progress and sustainable development.

Mallam Sirajo further appreciated the efforts of the members of Ogun State NIPR in promoting public relations practice in Nigeria.

He encouraged them to continue to act as true professionals by sustaining the ethical principles of the profession, stating that as professionals saddled with the responsibility of managing the image of others, they cannot afford not to be above board.

He called on the government of Ogun State to go a step further by encouraging professionalism in the state in order to promote the core essence of public relations profession, stressing that it will help to foster understanding, promote mutual trust and respect, build goodwill and strengthen relationships among different stakeholders, whilst also assisting to endear the citizenry to the policies and programmes of the government.