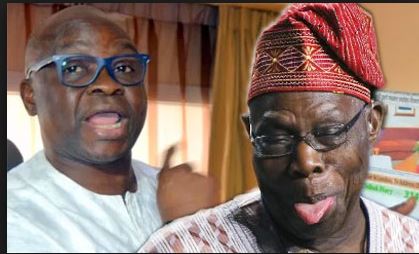 The leadership of a Peoples Democratic Party, PDP group in Ekiti State, the Ekiti PDP Repositioning, has knocke and berated former governor of the state, Ayodele Fayose, over his comments against former President Olusegun Obasanjo and his threats to jail the former President if he, Fayose, becomes the President of Nigeria.

Ekiti PDP Repositioning, in a statement signed by its chairman, Engr. Agboola Alaba, and made available to newsmen, described Fayose’s utterance as inconsistent, stating that it is not surprising that Fayose made such utterance, because he is known for his inciting statements.

Dissociating itself from the former governor’s utterances, Ekiti PDP Repositioning averred that traditionally, Ekiti has a lot of respect for elders and will not embark on chastising a prominent Yoruba leader of Chief Obasanjo status.

Engr. Alaba maintained that Fayose’s strange behavior and utterances has diminished the quality of PDP followership in Ekiti State.

Commending the Prince Uche Secondus-led National Working Committee of the PDP for its concerted efforts in ensuring victory for the party in future elections through reconciliation of warring members within the PDP, the group insisted that it was necessary to set the records straight; adding that contrary to the hallucinations and political blackmail being bandied around by Fayose and his cohorts, in their continuous failed efforts to set the leaders of the party in Ekiti State against the National Chairman, Prince Secondus through sponsored media attacks, it is solidly behind the National Chairman and pledged its cooperation and support, to build the party as a formidable leading party in Nigeria.