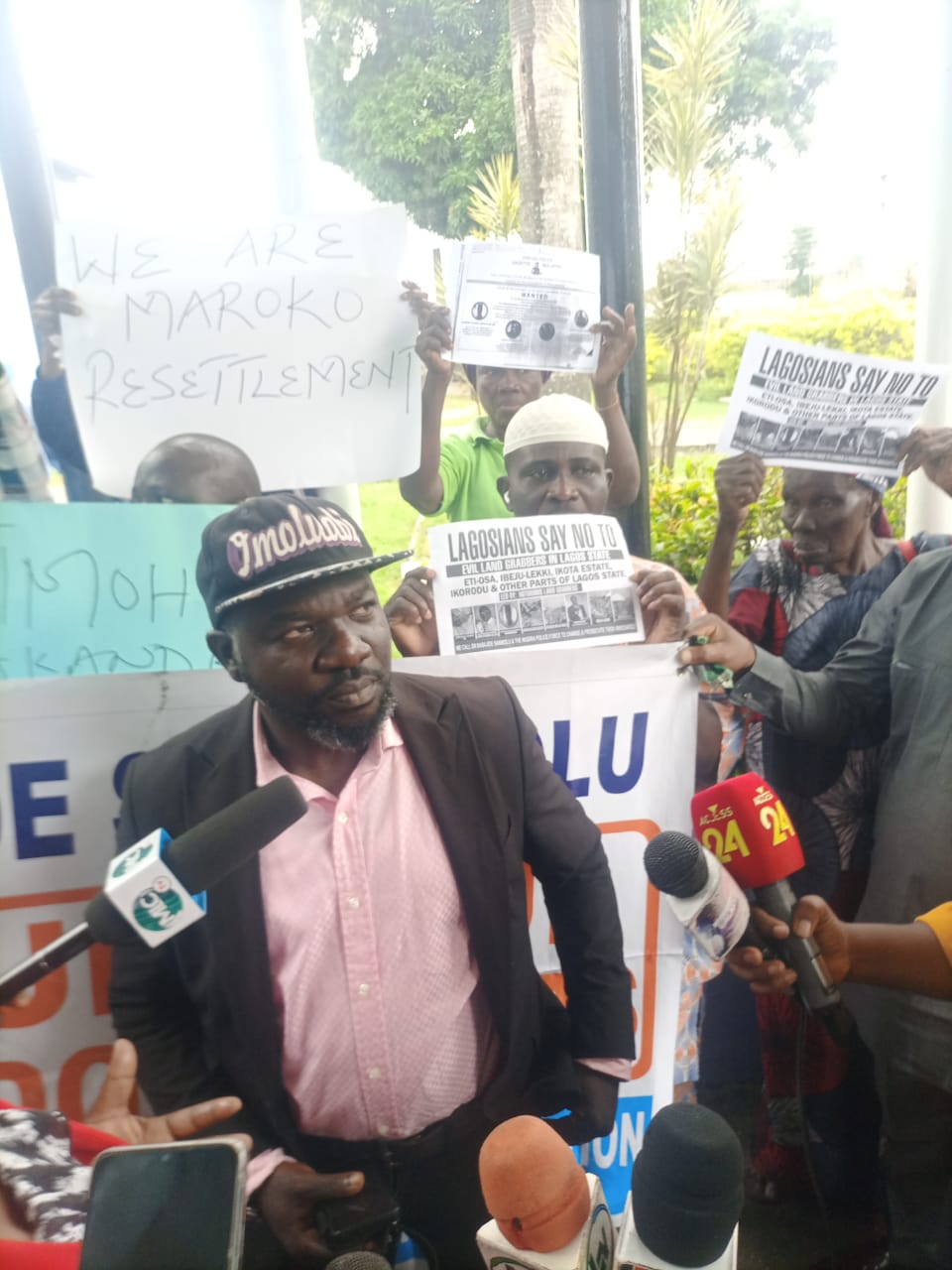 Lagosians on Monday sent a ‘Save Our Souls,’ SOS, to Lagos State and Federal governments over the activities nad impunity of land grabbers in the state.

The alleged land grabbers, according to the Chairman of Eti-Osa Bar Forum, Aare Oladotun Hassan, at a press conference held in Lagos, include: Jimoh Jelili Akande, aka JJ; Oladapo Okufowora, aka Aare; Otunba Olaiya; Akindele Adams Akinfolabi, aka Adamakin; Garba; Aircom Nigeria Limited, led by Idowu; and other notorious land grabbers, who are allegedly terrorising Ibeju Lekki, Eti-Osa, Ikorodu and other parts of Lagos State.

Aare Hassan said, “In view of the hydraheaded high unmitigated disaster and scale of unbearable pains, unprovoked killings and wilful destruction of lives and properties by the most dreaded terrorist groups and den of land grabbers; in local parlance, mostly referred to as “Ajagungbale,” the new norm terrorising the real estate industry and livelihood of innocent Nigerians in Lagos State.

“At this juncture, Lagosians can no longer continue to die in silence of abject failure of government and most regrettably law enforcement agencies, who most times are joint collaborators in this evil trade of forceful invasions and criminal trespass to people’s landed properties unimpeded, precipitating our heightened frustrations and protest to the Inspector General of Police, IGP, through the Assistant Inspector General of Police, AIG, Alagbon, and alert other police formations accross the country, in order to jointly stop this evil menace once and for all.”

On behalf of the traumatized land owners, who are daily subjected to harrowing experiences by the land grabbers, the legal practitioner called on the executive governor of Lagos State, Mr. Babajide Olusola Sanwo-Olu, to come to the urgent rescue of all the affected victims and vulnerable Nigerians residing in Lagos State, as a matter of necessity and demand immediate effect urgent action against these dreaded terrorist groups of land grabbers, most of whom are hired thugs employed and used to forcefully invade and execute unlawful permanent possession, and perpetrate continuous extremism of absolute control and ownership, sales, management and other illicit activities and wanton criminality.

He lamented that these criminals “habitually use police officers from the highest to the lowest echelons in the Nigeria Police Force to perpetuate their evil acts on hapless citizens, even as government functionaries and political leaders are not insulated, but all working in connivance with this evil groups.

“Subsequently, we appreciate the office of the IGP for his exemplary leadership style and optimum performance, since his assumption of office, most especially the recent declaration of some notorious land grabbers wanted by the IGP Monitoring Unit, including: Akindele Adams, aka Adamakin and others via Force Directive CID No. 48.

“Our demand is predicated on the fact that Lagosians have suffered a lots of ill-treatments in the hands of the aforementioned culprits and others, in active connivance with some orchestrated investigating police officers, who at one time or the other were used from the various police formations, clandestinely aimed at stopping and frustrating investigation efforts to go the full odd of investigation, and onward prosecution at a court of competent jurisdiction.”

He further added that most of the approved case files in various police formations where land grabbers matters has been referred to for investigation were largely compromised and marred with irregularities, thereby characterised with shallow and shoddy investigations, consequently due to the fact that the prime suspects have never been prosecuted nor their hired militia/thugs subjected to discreet investigation or interrogative questionings.

Je averred that this development has left Lagosians wondering whether the land grabbers are above the law, in view of their high-handedness and intimidating criminal threats, which they continuously perpetrated against innocent citizens.

Lamenting that these notorious land grabbers are clandestinely and always habitually working behind closed doors, planning to use the police hierarchy to deceitfully perfect their premeditated nefarious agendas anytime they received invitation letters or arrest warrant, so as to free themselves and further unleash further terror, thereby perpetrating their criminal activities against lawful citizens in Lagos State unimpeded, Hassan added that regrettably, the land grabbers have continued to boast of their connections to the highest police hierarchy, not only in Lagos, but up to Abuja, claiming that try are untouchable.

According to him, their continuous execution of their heinous conducts in recent times, wherein they have perfected the acts of transferring approved case files from one police stations and commands/units to another, in other to pervert and indiscriminately proliferate and perfect injustice, has resulted in insubordination, subversion of justice and committing unbearable mayhems in communities like: Ikota Housing Estate in Lekki Ajah/VGC axis of Lagos State, “where massive illegal demolition of houses is currently going on, led by Yemi Idowu, Managing Director, Airocom Nigeria Limited and others.

He laso lamented The connivance of some elements in the Lagos State Land Registry and other political figures in Lagos State to perfect illegal and forceful invasions and displacements of the one-time helpless people of Maroko displaced and relocated in 1991 to Ikota, Jakande and Epe by the then military governor of Lagos State, Raji Rasaki.

He added, “We are as well inundated with the excessive burden of criminality of another aggressive kingpin, Afolabi aka Adamakin, who is well fortified with various networks of police contacts and the use of fake title documents, unauthorised Power of Attorney from Efunloye Tinubu Family and verified unconnected court order, unfortunately acting in active connivance with some legal practitioners; another draconic “land thief” is Jimoh Akande aka JJ, and Otunba Olaiya Oladapo Olufowora, both of who took over innocent people’s land in Ibeju Lekki area of Lagos State, wherein one Madam Ruth Ehiamatalor is currently a victim; she was threatened to stay off her land having paid the owning family – Oguntaku Onibeju Family of Ori Eki Village Land – and all title documents signed and delivered to her, yet this sets of land marauding grabbers ,equally out of duress, collected another huge sum of millions of Naira for ratification for the same land; even as JJ and Aare insisted on forceful possession of her land at Oreki axis of Ibeju Lekki.

Hassan therefore reiterated that if nothing urgent is done to rescue the situation, the culprits are ready to wreck further havoc in Lagos State, which could snowball into huge crises, especially considering the state of our high level of insecurity and fragile peace in Nigeria.

He said, “Our request: we appeal to the good office of the Inspector General of Police should please direct FCID ANNEX Alagbon LAGOS and other police formations accross the country to conclude all pending investigation related to land grabbing and criminal trespass to land, and to call for onward monitoring and tracking of the case files from all the above mentioned police formations for proper due diligent investigation, in order to avoid duplicating the case-files for possible conclusion of police action on the criminal aspect of the cases, so that the erring party would be charged to court in due time soon.

“This will bring to an end of incessant attacks in the aforementioned communities, unlawful arrest, unlawful detention of innocent citizens of Ikota, Ikorodu, Ibeju Lekki communities by the used proxy police officers, this will enable the parties face full investigation accordingly.”

The press conference was followed by a peaceful protest by the victims of the activities of the marauding land grabbers.