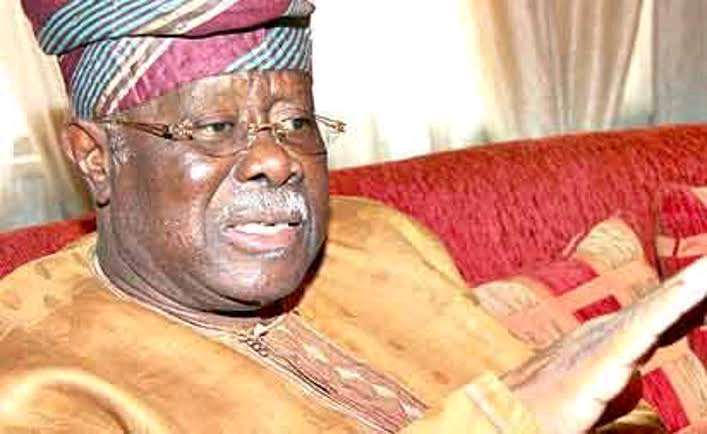 The Nigerian federation is not only skewed but distorted, nad the time to restructure is now.

This is the contention of former Deputy National Chairman of the Peoples Democratic Party, PDP, Chief Olabode George, who contended that the restructuring of the Nigerina federation is imperative for equity and fairness to prevail.

Addressing a press confer nice in Lagos on Monday, George said that the Nigerian polity was now straying towards its elastic limit.

He said, “It is now over-stressed and over-stretched beyond the bounds of acceptability. Our survival as a nation is genuinely being questioned from the desert to the sea.”

At the media parley, which had in attendance PDP leaders in Lagos State, themed: ‘Nigeria: Time to Chat a New Direction,’ George averred that this is time to change the path of old, look beyond what hobbles our progress, redefine our value system, and rejig the various anomalies that presently hinder the greater possibilities of the Nigerian union.

The former Director-General of the PDP Presidential Campaign Organisation also advised politicians across the country to put the interest of the generality of the people above all other interests, insisting that politics should be seen as public service and not as avenue to amass wealth.

George also condemned in strong terms the legislation by the Lagos State government seeking to shield criminals from prosecution by the Economic and Financial Crimes Commission, EFCC, describing it as “unconstitutional and retrogressive.”

The Atona Oodua of Yorubaland, at the press conference further reiterated his earlier call for the permanent pull down of the two tollgates at Lekki, Lagos advocating that a monument should be erected in honour of the young men and women who were martyred at the #EndSARS protests for a better Nigeria.

The former chairman of the board of the Nigerina Ports Authority also chastised the Lagos State House of Assembly, for its failure in its constitutional duties of protecting the welfare and the interests of Lagos.

Insisting that Nigeria would be a better place when we all eschewed ethnic jingoism, sectarian bias and crass nepotistic agenda, George siad, “We cannot continue like this. Something must give way. There is no other way. There is no other path. Those who have stripped our collective coffers must face the full wrath of the law as deterrence to others.”

Conclusively, George reiterated that “politics should be seen as a public service and not as an avenue to amass wealth; the EFCC is advised to look into the books of Alphabeta company, with the view of ascertaining criminal complicity in the looting of Lagos treasury; that the National Union of Road Transport Workers, NURTW, which is a militia wing of the All Progressives Congress, APC-led government in Lagos State and which continues to be the core of destabilization and violence should therefore be abolished; that the activities of Bola Tinubu and his cronies in the appropriation of the resources of Lagos State since 1999 till today should be thoroughly investigated by the EFCC and that Nigeria can be a better place when we all eschew ethnic jingoism, sectarian bias and crass nepotistic agenda.”

Quiting from Lettie Cowman in her book ‘Streams in the Desert,’ George concluded, “Human strength and human greatness spring not from life’s sunny side.
Heroes must be more than driftwood floating on a waveless tide.

“Every highway of life descends into the valley every now and then.

“Everyone must go through the tunnel of tribulations before they can travel on the high road of triumph.

“This is my resolve. This is my purpose. This is the anchor of my conviction. I hold my rudder true. And in the end, like the old negro spiritual lyric tells us: ‘We shall overcome’.”