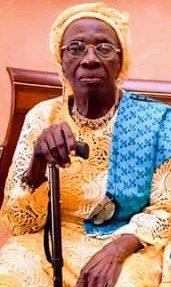 Former Senate Leader, Senator Victor Ndoma-Egba, SAN, has announced the funeral arrangements for his late mother, Madam Regina Achi Nentui, who died on July 1, 2020 at the age of 90 years.

A statement personally signed by the former Senate Leader said that Madam Nentui will be buried on Tuesday, August 4, 2020 at Ikom, Cross River State.

The statement reads, “The Ndoma-Egba/Nentui families of Akparabong and Ikom, Cross River State announce the burial arrangements of their mother, grandmother and great grandmother, Madam Regina Achi Nentui, who died on 1st July 2020 at the age of 90 years.

“Madam Nentui will be buried in a very simple ceremony, according to her wish on the 4th of August 2020 in Ikom. As a one time Chairman of old Ikom County Council; (now Ikom, Boki & Etung Local Governments) between 1960 and 1963, her remains will make a brief stop-over at the Ikom Local Government headquarters, Ikom, before proceeding to the Holy Family Catholic Church, Ikom for a funeral mass. Interment will be a family only event.

“We acknowledge all the condolences and goodwill extended to us by families, friends and the public on the demise of this most remarkable woman.

“In compliance with her wish and extant government protocols on the COVID-19 pandemic, the burial will be low keyed and devoid of any ceremonies howsoever. There will be no vigil, no reception and no visitations. Condolence visits are put in abeyance until such a time when the families are able to properly celebrate her life.

“We crave the understanding of our friends, well wishers and the public. It is our new normal, given the unrelenting coronavirus pandemic, and deference to Mama’s wish.

“On the date of her burial, we enjoin all to join us through prayers for the repose of her soul.”

Among the first women from old Ikom (now Ikom, Boki and Etung local government areas) of Cross River State to receive western education, she spent many years as a teacher with the Roman Catholic Mission.

She joined the civil service of the then South Eastern State (now Cross River and Akwa Ibom states) during the Nigerian Civil War as a social worker and established the Remand Home in Ogoja.

Unlawful Possession Of Firearm, Other Crimes: Female Student, Lover, Others Paraded In C’River