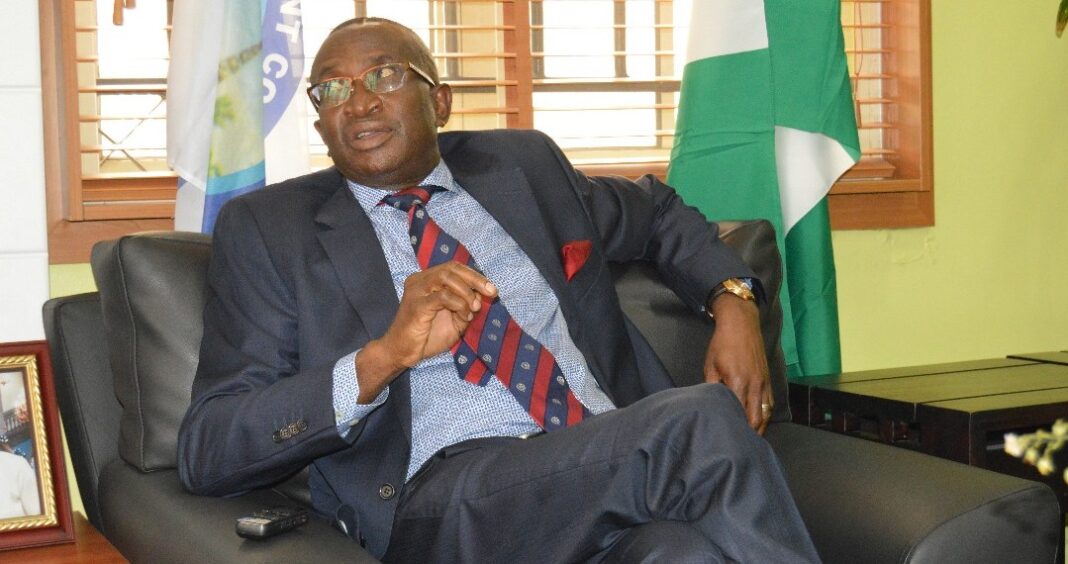 Ndoma-Egba was in the Senate between 2003 and 2015 where via quality leadership he gave the people of Cross River Central senatorial district the best of representation, rising to become the Senate Leader and one of the most influential lawmakers in the country.

At 65, the unassuming, easy-going and benevolent Senior Advocate of Nigeria, SAN, has indubitably, lived a life of fulfillment, worthy of emulation. He has greatly distinguished himself as a man of honour and integrity, both in politics and the legal profession.

A silent achiever and philanthropist, Ndoma-Egba has several awards and laurels in his kitty, earned on account of his service to humanity, enormous contributions to democratic growth and nation building. Among his many awards are two national honours – Officer of the Federal Republic, OFR, and Commander of the Order of the Niger, CON.

In all the positions of authority he has occupied, he left an indelible mark of performance and unblemished record of rectitude and proved to be a pragmatic, purposeful and resourceful leader, always building confidence in the minds of his followers.

The former parliamentarian was appointed to serve on a federal board under the civilian administration of the late Shehu Shagari at the very young age of 23. At the age of 26, he was made the Commissioner for Works and Transport by the then governor of the old Cross River State.

He was the pioneer Chief Executive of the Cross River State Directorate for Food, Roads and Rural Infrastructure. He was the Chairman of the Calabar branch of the Nigerian Bar Association, NBA, for an unprecedented three terms. He was also a three-term president of Calabar Chamber of Commerce. He obtained his LL.B from the University of Lagos, UNILAG, in 1977 and the LL.M from the University of Calabar, UNICAL, with various certificates from the Irish Development Institute, Shannon Ireland, Stanford and Harvard Universities in the United States of America.

Ndoma-Egba’s 12-year voyage in the Senate was quite eventful and exciting. Before becoming the Senate Leader in 2011, he was the Vice Chairman, Senate Committee on Solid Minerals, Chairman Senate Committee on Media and Public Affairs and Deputy Senate Leader. He was deeply involved in inter-parliamentary activities as leader of Nigeria’s delegation to the Association of Senates, Shooras and Equivalent Councils in Africa and the Arab World, ASSECAA, headquartered at Sanaa, Yemen in the 6th Senate and the Pan African Parliament, PAP, at Midrand, South Africa in the 7th Senate.

The legal icon was a delegate to the 50th General Assembly of the United Nations in the fifth Senate and also President of the first ever Africa Legislative Summit, held in Abuja in November 2013 – a summit that brought together Heads of Parliaments from across the African continent. He was rated as one of the super dynamic senators in his time with about 40 bills to his credit, including the ‘Freedom of Information’ and ‘Prisons Reform’ bills. A record that remains unequalled in the history of parliamentary representation in Nigeria. Also to his credit were several motions he moved to address salient issues of national concern at different times.

In his determined effort to bring succour to his people, he facilitated countless number of valuable projects and programmes to his senatorial district. His scholarship award scheme, meant for undergraduate and postgraduate students, was one of the manifold philanthropic initiatives he undertook to add value to the lives of the underprivileged within and outside his constituency.

Upon leaving the Red Chamber in 2015, he returned to his law practice as a Senior Partner in the law firm of Ndoma-Egba, Ebri & Co in Abuja.

Shortly after quitting his former party, the Peoples Democratic Party, PDP, to join the ruling All Progressives Congress, APC, President Muhammadu Buhari in 2016, appointed him Chairman of Niger Delta Development Commission, NDDC, – a position he held devoid of any scandal until he resigned to contest in the 2019 general election.

In an interview on his 65th birthday, Ndoma-Egba acknowledged that everything he has achieved in life was by the grace and mercy of God and not by his power.

He had said in an interview, “I am very thankful to God for His grace and many blessings, that at 65, I have many stories to tell and I am in very good health. I feel grateful to the Almighty that he has taken me this far without me having done anything I am ashamed of. This could only have been by His grace.

“My growing up was normal and ordinary. Though I was among the first in my part of the world to have both parents who were educated, my parents were transitional in the sense that their western education notwithstanding, they remained very traditional people. My early life was with my mother and grandmother, who were Roman Catholics. I did the things children of my age did, lived in a compound with other people, went to school, after school it was farm, then house chores, including going to the stream, and later public stand pump, to fetch water for domestic use. I had no privileges whatsoever and no silver spoon as is largely believed growing up. I was an ordinary child who did well in school, was in the church and school choir and was a mass server or altar boy.”

Speaking on his journey in politics, the distinguished politician remarked, “I still have mileage, but I thank God for how far I have come and the rare privileges l have had. I was a member of the first Board of Cross River Basin Development Authority (appointed by President Shehu Shagari) before I was 24, Commissioner for Works and Transport in old Cross River State (now Cross River and Akwa Ibom states) just before my 27 birthday, ran for governor of Cross River State in my early 30s, became the first Senior Advocate of Nigeria, SAN, from outside legal practice and academics and from the National Assembly, first Chairman, Senate Committee on Media and Public Affairs, Deputy Senate Leader and Senate Leader in the 5th, 6th and 7th Senate respectively; the very first Senate Leader from the South-South, two national honours etc, God has certainly been partial to me.”

On whether he is at ease with the kind of politics we practice in Nigeria, where godfatherism and/or money determine who gets what, he opined, “Our politics is far from ideal. No politics anywhere is ideal though. Money is always important in politics anywhere, including Nigeria. The issue however is to what purposes money is deployed. In our case it is meant to buy votes thereby denying the voters, because of pervading material and spiritual poverty, the choices available to them. Money is not used as is done elsewhere to educate the voters on the issues in the polity and the choices available. Because of the invidious use of money, Godfathers who have it seize control of the electoral process and because governors have access to unlimited resources, they inevitably take total control of the internal processes of their respective political parties. Government is no longer of the people, by the people and for the people in ancient Greek traditions, but rather government of governors, by governors and for governors in which everyone else is either isolated or recruited by the governors as cheer leaders. This undermines the fundamental essence of democracy which is choice.”

The quintessential leader, who took after his late father’s profession said, “Reading law came much later when my aspiration to become a Roman Catholic priest was not realized, because of the Nigerian civil war. A young friend once joked that it took God a civil war to stop me from being His priest and wondered what kind of priest I would have become. My first entrance examination to the university, the then University of Ife, was to read medicine. It was in the last term of the Higher School that I changed to the Arts against the advice of the then Principal, Rev Father Hayes. He even tried to enlist my father to stop me from making the change.

“I watched my father as a practicing lawyer and as a judge, first of the High Court and later of the Court of Appeal. He was professional; hardworking, honest, incorruptible and public spirited. He was always at his desk late into the night; he was the very first lawyer from our part of the world and is acknowledged as the father of the profession in our parts. He inspired several generations of lawyers and mentored many, including Kanu Agabi, SAN, former Attorney General of the Federation and Minister of Justice and a leading lawyer in the country, and many more.”

On the unfortunate incidents that happened to him in year 2020 – from the death of his mother and mother-in-law to the destruction done to his residence in Calabar during the #EndSARS protest by hoodlums, to losing the closest woman to his heart in a ghastly motor accident, he asseverated, “Every child of God will face trials at some point of his or her life. The consolation is that God never gives any person burdens he or she cannot bear. It is no different in my own case. I cannot question Him about the confounding events in my life in 2020, especially the death of my wife, Amaka, in November of that year. I however give Him thanks as we are enjoined to do by the scriptures in every situation. 2020 strengthened my faith and trust in God. He knows all and I have always surrendered to His will. I never questioned Him when he was blessing me so abundantly. I cannot do so now. All I know is that the worst is behind me and the best is ahead of me.”

Asked how easy it is for him celebrating his 65th birthday without his lovely wife standing firmly by him, as she had always done at a time like this every year, Ndoma-Egba revealed, “Before I met my wife I had celebrated only one birthday in my life, my seventh birthday. She started celebrating my birthdays initially on a small scale and later very elaborately. I am sure she would have made this one a very big event especially given what we went through in 2020, but God knows best. I will celebrate it quietly in prayers of thanksgiving to God for everything, especially the life we shared and the sweet memories she left behind. She cannot die because she lives in my heart and the hearts of the thousands of people she touched in so many ways. To live in the hearts of those who love is not to die. It will be the first birthday I will be celebrating without her physical presence. I however know for sure though that she will be with me in spirit and she is in a much better place.”