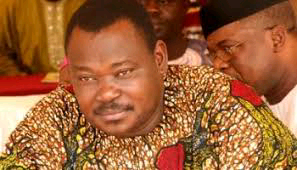 Billionaire businessman, Mr. Jimoh Ibrahim, has prayed an Abuja Federal High Court to strike out a motion filed by the Asset Management Corporation of Nigeria, AMCON, against its order.

Ibrahim, through his counsel, Oladele Oyelami, prayed the Justice Okon Abang-led court, following the plaintiff’s absence in court to take the application.

AMCON had filed a stay of execution of order the court granted Ibrahim over alleged N69 billion debt.

The development followed the application filed by AMCON’s counsel, Ade Adedeji, SAN, to appeal the orders made in favour of Ibrahim and his companies by Justice Abang.

Abang had, on February 22, 2021, vacated the orders obtained by AMCON in aid of Taiwo Lakanu, the receiver/manager, it appointed to manage the assets of two seized companies owned by Ibrahim over alleged N69 billion debt.

The judge, in a ruling, held that it was an order made without jurisdiction, because there was a subsisting order by a court differently constituted on the matter.

The judge had fixed January 24 to hear the corporation’s motion.

But when the matter was called, counsel to AMCON was not in court.

However, Ibrahim’s lawyer, Oyelami, who held the brief for Chief Adeniyi Akintola, SAN, told the court that the defence had already joined issues on the appeal with AMCON.

He said his clients, Ibrahim and the Nicon Investment Limited, had filed an application challenging the appeal itself, but AMCON had not responded to their brief of argument and the application they filed in opposition to the appeal.

The lawyer said though the Court of Appeal was yet to give a date for the hearing, “giving the urgency of the matter, we have taken it upon ourselves to do a letter to the Court of Appeal, which we have done asking for a date to hear the appeal, since the appellant is not willing to prosecute the appeal.”

With respect to the application for stay of execution, which AMCON filed, Oyelami prayed the court to strike it out, but the court declined on the ground that the Court of Appeal was already aware of the matter by virtue of the appeal.

The judge said he could not make an impossible order that would go contrary to established the principles.

Abang then adjourned the matter until March 10 to abide by the outcome of the appeal.

Justice Abang, in his ruling delivered in favour of Mr Ibrahim, had said that AMCON misled the court by withholding material facts from the court to obtain the interim ex-parte order.

It would be recalled that Justice Nkeonye Maha of a Federal High Court, Abuja, had, on Jan. 4, 2021, granted the AMCON exparte motion.