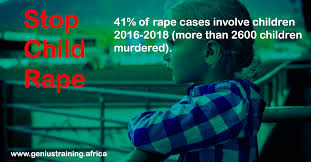 A middle-aged man, Taofeek Yunus, has been arraigned before an Ilorin, Kwara State family court for an alleged sexual molestation of a six-year old girl.

Yunus was said to have committed the shameful act at Alore area of Ilorin, the Kwara State capital

Police First Information Report, PFIR, said the victim’s mother, one Bashirat Ibrahim, reported the matter at the Oloje Police Station, when she noticed some strange development around her daughter.

The report added that the mother noticed that her daughter’s movement was no longer stable and when she examined her, she discovered that she had been sexually abused by Yunus, who was found with her.

Police prosecutor, Sergeant Akinjide Adisa, had prayed the court to make Yunus face the appropriate sanction in law to serve as deterrent to others who might want to perpetrate such as heinous crime.

The presiding magistrate, Shae Lawal, turned down the prosecutor’s prayer and granted the accused bail and adjourned the case to 29th of this month.