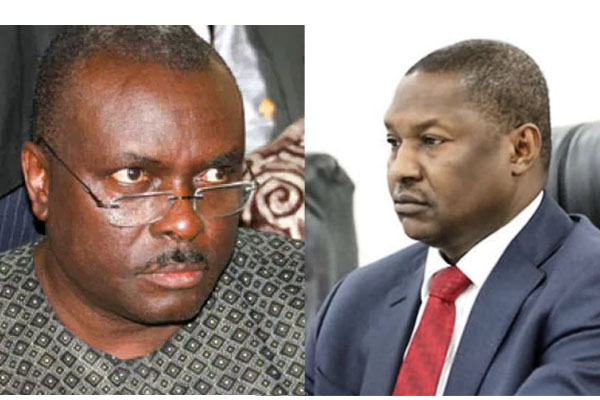 He has no known middle name and, as such, he doesn’t sit on the fence. With magisterial standoffishness, he exemplifies the ruin of law. He never tiptoes, never prevaricates when it’s time to swat Southern flies disturbing the herd. He’s Fulani, the strong and all-conquering breed.

Though many call him foolish, he wasn’t born on April Fools Day. He was born on April 17, 1967, when the little cry of a newborn rang in the serene distance. On the seventh day, the tot derived the initials, A.M, from a birth name that would later grow to read law but squander the knowledge before the god of clannishness and nepotism.

He is Abubakar Malami, 54-year-old Attorney-General of the Federation and Minister of Justice.

Birthdays and deathdays are important human milestones. Reggae superstar with a middle name, Robert Nesta Marley, aka Bob Marley, was born on February 6, 1945, 70 years before a 48-year-old Malami was made minister by Nigeria’s President, Major General Muhammadu Buhari (retd.), in 2015.

Stricken by cancer, Marley bade the world goodbye on May 11, 1981, at the University of Miami Hospital and Clinics, USA, bequeathing an imperishable legacy of didactic songs, some of which suggest ways out of Nigeria’s current turning and turning in the widening gyre.

In this article, I intend to celebrate the 40th anniversary of Bob Marley’s transition to immortality. Also, I wish to spotlight the redefinition and affirmation of animal rights over human rights by the great Mallam Malami.

This is what Malami said last week in reaction to Southern Nigeria governors’ banning of open grazing, “It is about constitutionality. Within the context of the freedoms enshrined in our constitution, can you deny a right of a Nigerian?

Before an inscrutable ad lib after the third stanza of ‘Crazy Baldheads’, Marley says, “I and I build the cabin/I and I plant the corn/Didn’t my people before me/Slaves for this country?/Now you look me with your scorn/Then you eat up all my corn.”

It’s clear that Marley and Southern Nigerian governors and their people were agreed on the need to chase the crazy baldheads out of town.

I don’t know what ad lib Marley would make of these rhyming names: Buhari/Yemi/Kyari/Malami/Pantami/Fulani/Ibori and graffiti. But I know the clock is ticking down for Nigeria, and the chickens are heading homewards to roost.

“There’s a natural mystic/ blowing through the air/If you listen carefully now you will hear…/Things are not the way they used to be/I won’t tell no lie,” sings Bob Marley in ‘Natural Mystic.’

A few weeks ago, another Fulani in Buhari’s kitchen cabinet, Isa Pantami, who’s the Minister of Communications and Digital Economy, came under fire when a viral video surfaced showing Pantami saying Boko Haram terrorists don’t deserve to be killed like pigs, even as he bemoaned the killing of al-Qaeda founder, Osama bin Laden.

Like Pantami, Malami should be commended for upholding the golden rule in the Animal Farm Nigeria has turned into, where some animals are more equal than humans; four legs good, two legs bad.

Marley was a preacher, so is Malami, though their messages belong to different worlds. Marley sings, “Guiltiness rests on their conscience.” But Malami feels man is guilty for demanding to live above cattle. Marley’s message calls man to love, unity and redemption. Malami’s message calls cows to eat farmers’ sweat, roam and moo.

Warning against inequality and human wickedness, Marley predicts in his song, ‘War’: Until there are no longer first class and second class citizens of any nation/Me say war. War in the East, War in the West, War up North, War down South/ War, War!” But Malami doesn’t see a classless society. He sees a classed society where Fulani cows possess greater rights than human beings.

Marley didn’t foresee the unfolding shame in Delta State when he composed ‘One Love,’ because Delta had yet to be created when the song was released in 1965.

Delta State government, since the days of the immediate past governor, Dr Emmanuel Uduaghan, to the days of the incumbent, Dr Ifeanyi Okowa, has been a shackled slave in the farm of disgraced former Governor James Ibori.

It’s not ‘One Love’ that made Uduaghan and Okowa keep quiet and continue to worship in the mud of corruption at the feet of Ibori. It’s ‘One Greed’. Despite being jailed in the UK for corruption, neither Uduaghan, who was governor when Ibori was jailed, nor Okowa, who became governor when Ibori was released, has ever condemned the King of Gluttony.

Last week, when I saw the video of Ibori dancing at a public function, while security men and folks ‘cleared the road’ for him, I remembered Marley’s ‘Redemption Song’ and the plundering old pirates.

Though I won’t mind if Abuja gives Delta part of the recovered Ibori loot from the UK, my mind cut, as Warri people would say, to see the Delta State government falling on the ground, wailing and demanding justice in the way the loot of the insatiable Ibori should be shared.

Uhnmmm!? Delta wey dey support Ibori since dey talk now? Well, maybe Delta has a point, after all. The Federal Government, led by then President Musa Yar’Adua of the Peoples Democratic Party, PDP, didn’t condemn Ibori nor his ‘comraid’ in corruption, Diepreye Alamieyeseigha, who as Bayelsa State governor, was impeached and sentenced in Nigeria to just two years imprisonment for multi-million dollar corruption after jumping bail in the UK. Alamieyeseigha only spent some weeks in prison before his release.

Deputy to Alamieyeseigha at the time, Dr Goodluck Jonathan, rose in support of the governor and described his trial as witch-hunt, despite the fact that Alamieyeseigha pleaded guilty to six charges. When he later emerged President, Jonathan never condemned the looting of Bayelsa by Alamieyeseigha. Marley’s ‘Time Will Tell’ hums in my mind.

This is just the same way the Buhari-led Federal Government has never condemned the armed robber General, Sani Abacha, despite the unending recovery of loot stashed away by the late thief.

Particularly, Nobel laureate, Wole Soyinka, in 2018, told Buhari to ‘stop creating confusion in the minds of Nigerians’ by honouring the winner of the June 12, 1993 presidential election, MKO Abiola, and admiring his tormentor, Abacha, saying loyalty could become perverse. With Soyinka’s mention of Abiola, I remember Marley’s “Johnny was a good man.”

The embers of the crashed NAF jet in which the Chief of Army Staff, Lt.-Gen. Ibrahim Attahiru, and 10 other military officers lost their lives, are still smouldering. Nigeria mourns. But, questions beggar answers. Why are military planes dropping off our air? Twenty military officers have been killed in three military jet crashes within the last three months. Something is terribly wrong somewhere. I suspect lack of proper maintenance.

When a military Alpha-Jet went missing in the plains of Boko Haram-dominated Borno on March 31, 2021, I thought the debris of the aircraft would never be seen. We all know who controls Borno.

I remember that Nigeria embarked on four jamborees into space in the first decade of the millennium when she launched four separate satellites. None of the satellites is functioning effectively today. None can be deployed to look for the missing aircraft or fight insurgency. And nobody is answering questions for billions down the drain. I shot the sheriff.

•Odedola writes from the United States of America, and can be reached via: Email: tundeodes2003@yahoo.com; Facebook: @tunde odesola; and Twitter: @tunde_odesola