National Compass NG
Home Discourse Lateef Jakande: An Ode To A Pioneer Of The Craft 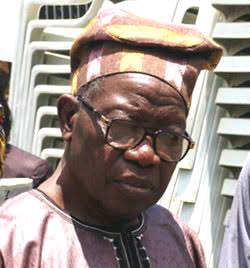 Lateef Kayode Jakande was the archetypal leader, well cultivated in rare simplicity, nurtured in quiet unobtrusive strength. He was indifferent to the transient appurtenances of power. He could not be moved by the ephemeral tinsels of pretentious authority that distorts the vague little men of the hour.

He stood in some distant, implacable reverence; genuine and solid, grave, sobering, rooted in some giant solitary, undisturbed affirmations.

He cared not about acquisitive emblems. He shunned the odious glamor of state power. His fixity was about service, selflessness and the devotion to the people’s cause.

He was spartan in all things. Truthful, genuine, simple and spare in summative bearings. He was unknown to acquisitive tendencies, distant from the tawdry, base, sickening gains of the moment. His focus was about the general welfare of the deprived, the poor, the disused, the famished flung upon the outpost of the wasteland.

Jakande was just a rare breed, an uncommon man in an uncommon time, whose talent was dedicated to the freedom of his country from the strictures of the colonial yoke. His pen was fearless, resolute, relentless, fixated on the freedom path.

Collared many times by the furies of the colonial overlords; shackled, restrained, blackmailed, lacerated by the whims and the caprices of power, he stood in defiant valor; stoic, immovable, unwavering and steady in the just cause.

If in the rare, restricted firmament of the pioneering Nigerian journalistic luminaries, there was the legendary Babatunde Jọsẹ, there was also a Jakande, looming in proximate giantism.

His pen was calm and penetrating, scathing without acerbic withdrawal. Writing with the nom de plume of John West, he waged a necessary combative journalistic pitting; fierce, engaging, pronounced in patriotic attentiveness, unbowed before the vain condemnatory lash of the cruel tools of power.

Jakande wore a rare iconic presence: assertive without the slightest intimations of of hubris. He spoke softly with resolute contemplative bearing.

There was no intrusive emblem about. There was no straying into exaggerated Olympian repose enforcing the gloating dictates of neophytic power grabbers, who falsely believe they wield eternal sway.

Baba Kekere is gone. But he shall linger in appreciative largeness for his unprecedented developmental attainments as the greatest governor of Lagos State, for the purity of his leadership, for his instinctive sacrifice to the enhancement of the human dignity.