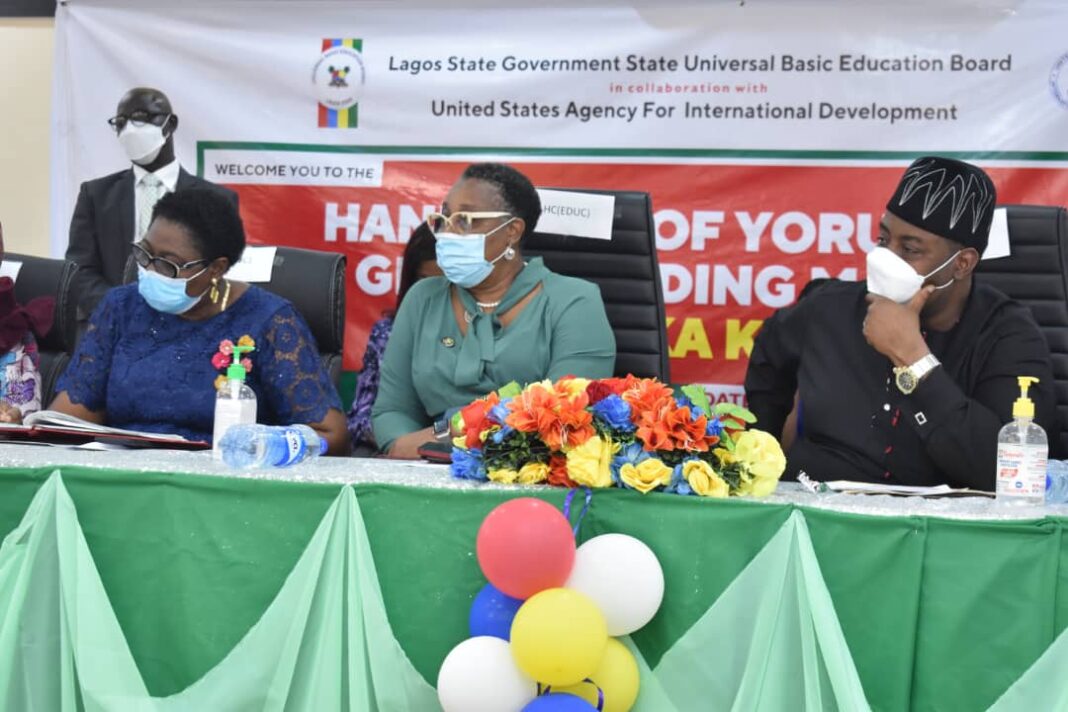 As part of efforts to encourage the teaching and learning of languages, especially the Yoruba language, which is the dominant mother tongue in the state in public schools, the Lagos State government has collaborated with the United State Agency for International Development, USAID, towards providing educational learning materials to schools. Speaking at the handing over ceremony of Yoruba Early Grade Reading Materials, “Je Ka Kawe,” at the Lagos State Universal Basic Education Board, LASUBEB, Maryland, Ikeja, Lagos the state Commissioner for Education, Mrs. Folasade Adefisayo, stressed the need to motivate the younger ones to learn the mother tongue, even as she insisted that it will increase their literacy levels and expand the availability of quality local language teaching and learning materials for pupils within the state. Expatiating extensively on the need for parents to encourage their wards in interacting and learning the Yoruba language, as this will give them an in-depth knowledge of their ethnic background, Mrs Adefisoye assured that to stem the tide of the dearth of the Yoruba language and having semi-lingual children, more teachers will be recruited, while the teaching of languages will be intensified in the curriculum. She concluded her keynote address by commending the laudable initiative and collaboration with the USAID, adding that the gesture is a collective effort that would yield futuristic benefits.

Earlier, the Executive Chairman of LASUBEB, Hon. Wahab Alawiye-King, stated that the infusion of local languages into the educational system will not only increase the chances of its survival, but its introduction as a medium of instruction will aid and help pupils succeed educationally. Stressing that the formative stage of the child is important and will help mould and shape their minds, Alawiye-King emphasized that it is essential to inculcate the cultural and linguistic diversity in their learning. Presenting the Yoruba Early Grade Reading Materials to the state government, the Chief of Northern Education Initiative Plus, NEI+, Mr. Nurudeen Lawal, maintained that the motive was borne out of the need to achieve positive learning outcomes as the beginning of education is reading, hence critical for national development.

Mr. Lawal revealed that to achieve this, there will be teachers’ training and teachers’ guide on how best the language can be imparted.

He revealed that the materials were developed based on scientific principles and socio-cultural considerations.

He added, “The Yoruba language Curriculum provided by the Nigerian Educational Research Development Council, NERDC, was meticulously followed in the development of the materials, with the full participation of representatives of the Federal Ministry of Education and other stakeholders and were subjected to peer review, field testing and post field testing review, before the final production.”

In her remarks, the Permanent Secretary, Lagos State Ministry of Education, Mrs Abosede Adelaja, opined that the society has a role to play in using our language as an identity, stressing that the state government will utilize its resources to expand the availability of quality local language teaching and learning materials for reading amongst pupils.