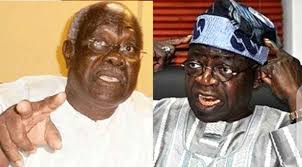 To say the bye-election held on Saturday, December 5, 2020, for the Lagos East senatorial seat is a disaster for the opposition Peoples Democratic Party, PDP, will be an understatement.

From official results, the All Progressives Congress, APC, clearly posted a landslide victory that will see Abiru taking over the seat occupied by late Bayo Osinowo (Pepperito), following the latter’s death months ago.

Former Managing Director of Polaris Bank, Tokunbo Abiru, the APC candidate for the election polled 89,204 votes to beat his closest rival, Babatunde Gbadamosi of the PDP, who garnered a paltry 11,257 votes.

But the real news is that the emphatic drubbing of PDP took place without the presence of Asiwaju Bola Ahmed Tinubu, as the acclaimed strongman of South-West politics and National Leader of the APC has been out of town since Thursday.

Our checks revealed that Jagaban was in Osun on Thursday, from where he proceeded to attend the burial ceremony of Awo’s daughter (Mrs Tola Oyediran) at Ibadan, Oyo State on Friday. From the ancient Oluyole city, Asiwaju took off to Kano for another event.

Our check further revealed that Asiwaju left Kano for Abuja on Saturday for another engagement.

From this, it is clear that the Lagos APC machine is so super-efficient and primed to deliver even without Asiwaju being physically on ground.

This shows that PDP’s touted leader in Lagos, Chief Bode George, remains a paper tiger, with little or no electoral value. Being garrulous or prolific with letter-writing full of high-sounding words is surely different from being electorally virile.

The “massacre” of PDP in the Lagos East bye-election was executed effortlessly by “Asiwaju boys.”

Recall that since the return of democracy in 1999, Bode George has consistently failed to deliver PDP in Lagos, not even under former President Olusegun Obasanjo, when one of Nigeria’s main cash cows, NPA, was put under him as National Deputy Chairman of PDP. He often failed to win even his polling unit in Isale Eko.

Clearly, Asiwaju has perfected a magic formula for always inflicting humiliating defeat on Bode George at every election cycle in Lagos in the last two decades.

Maybe, grumpy Bode George will blame the COVID-19 pandemic this time for yet another disastrous outing.