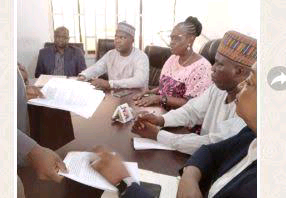 To forestall agitations by the workforce in Kwara State-owned tertiary institutions, the state government has signed an
agreement with the Joint Public Service Negotiating Council, JPSNC, on the implementation of the N30,000 National Minimum Wage.

This was a consequential adjustment for non-teaching staff at the Colleges of Education, Kwara State Polytechnic and the College of Arabic and Islamic Legal Studies, CAILS, taking effect from the 1st day of July, 2022.

The agreement, among other things, according to the Chief Press Secretary to Governor AbdulRahman AbdulRazaq, Rafiu Ajakaiye, in a statement made available to the media, sets the effective date for the implementation of the new minimum wage to cover the concerned workers at the tertiary institutions.

The statement further quoted the state Head of Service, HoS, Mrs Modupe Oluwole, as saying thay “we are gathered here to sign the last bit of the N30,000 minimum wage and consequential adjustment for non-teaching staff at the Colleges of Education, Kwara State Polytechnic and College of Arabic and Islamic Legal Studies, CAILS.

“I want to say thank you to these unions for being considerate. This agreement is made this 25th day of July, 2022, between the Kwara State government and the Joint Public Service Negotiation Council, JNC, Kwara State organ, on behalf of Senior Staff Union in Colleges of Education Nigeria, SSUCOEN, and Non-Academic Staff Union, NASU, on the implementation of Consolidated Tertiary Education Institutions Salary Structure, CONTEDISS.

She further added, “Everyone knows the situation of things today in the country. Many states in the country are finding it very difficult to pay the necessary wages, including Kwara. But, His Excellency, Mallam AbdulRahman AbdulRazaq has made the payment of salaries first line charge to ensure that all salaries are paid as and when due.

“The governor has promised not to renege on the agreement. So, I think he deserves to be applauded by all.
Governor AbdulRazaq recognises the fact that workers are key and they need their pay, and he is doing all he can to ensure that workers get paid.

“Almost everything that comes to the state goes to the payment of salaries. We have states that are counting months of unpaid salaries, but the situation is not like that in Kwara State.

“The government appreciates you and we are not taking this lightly. We will continue to do our best to encourage workers. We know some states started paying the minimum wage, but could not continue. We thank God for the kind of governor we have in the state.”

The Kwara State Chairman of the Nigeria Labour Congress, NLC, Comrade Isa Ore, in his remarks, commended Governor AbdulRazaq, the HoS and other key stakeholders in the struggle for achieving the feat.

He said, “Today, another landmark achievement was made here in the history of Kwara State. Minimum wage and consequential agreement was signed for the education sector.

“The workers in Kwara State are known to be patient and we have mutual understanding with the state government. In the next few years, another minimum wage will come on board.”

The Chairman of the Senior Staff Union in Colleges of Education, Nigeria, SSUCOEN, Comrade Love Adeyemi, applauded Governor AbdulRazaq for showing sincere commitment to the welfare of the Kwara workers.

He said, “We just signed agreement on minimum wage and consequential adjustment as it affects workers in Kwara State tertiary institutions. It has been a tortuous journey since 2019 and the government has been very responsive.

“Each time we raise the issue, the government tries as much as possible to attend to us and made us see reasons why government could not pay since 2019. This year, we felt that all other categories of workers have been paid and it is high time we got ours too.

“We are grateful today that at the end of the day, we are able to get to bargaining point. It wasn’t easy. We didn’t get everything we wanted, but considering all other factors, we have to show understanding with the state government.

“The government has shown so much concern and commitment, and we hope that as time goes on the minimum wage will be reviewed.

“We thank His Excellency, Governor AbdulRahman AbdulRazaq, the HoS, Mrs Oluwole, for being sincere and committed to their words throughout the struggle.”