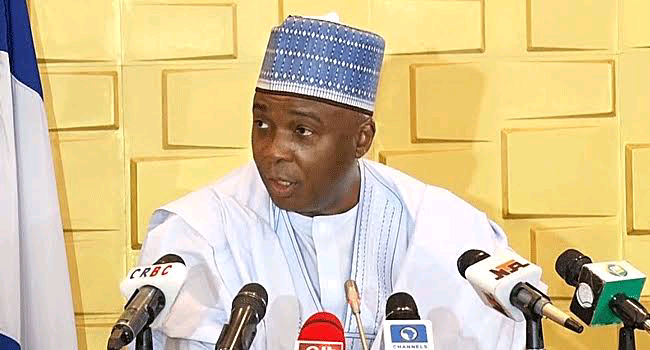 There were strong indications in Ilorin, the Kwara State capital that former Senate President, Dr. Bukola Saraki, will contest for the presidential seat come 2023, and he is not denying this.

The chorus was loudly evident at the just held Kwara State congress of the Peoples Democratic Party, PDP, where both the Masters of Ceremony, MCs, and thousands of Saraki followers called on him to get prepared to be the next tenant in the Aso Rock Villa.

According to them, Nigerians have tasted the so much change they clamoured for in 2015 and had since come to realise that the situations that led to the call was far better than the present one in the Nigeria.

They expressed satisfations with the way Saraki, as the then Senate President, conducted the affairs of the red-carpet chamber, which they said put the executive arm of government in good check, unlike what they said now obtains in the Senate.

The congress, as it is the tradition in the political camp of the Sarakis, returned all the new officers of the state PDP unopposed, to run its affairs for the next four years. This was done through an adopted concensus method, supervised by both a delegation of the party’s national office and the Independent National Electoral Commission, INEC.

Its on record that both late Dr.Olusols Saraki and his son, Bukola never recorded disputes over their choices of candidates to run for elections, neither has it ever happened that litigations come on the heels of picking flag bearers for the party in the camp.

At the congress, former Speaker of the state House of Assembly, Rt. Hon. Babatunde Mohammed, emerged the new state chairman.

He took over from Engr Kola Shittu, who for three years had been holding sway, immediately Dr. Bukola Saraki led his mamoth supporters back to the PDP, only to lose all elective positions to the All Progressives Congress, APC, he left in 2019, the first time in about four decades of Sarakis’ dominance of Kwara politics.

The INEC team, led by Mallam Shehu Abdulkadir, to the event, said their assignment was to ensure the right thing was done, even the adopted consensus method,promising that the commission would not be partial in the exercise.

Former Commissioner for Communication, Kwara State, Alhaji Babatunde Ajeigbe, who is a lawyer, administered the oath of office to the new party leaders.

In his remarks, Senator Saraki said that the peaceful congress was a sign that the party was ready to lead and take back power particularly, in Kwara State.

He said, “We made history today by giving the post of Organising Secretary to a woman, unlike the sole position of woman leader. We also have majority of our members as youth, and we are showing that we are ready to chart the way for political party adminstration in Nigeria.”

Though his body language was in tandem with the loud calls on him to begin to prepare to throw his hat into the 2023 presidential race ring, Saraki simply urged his followers to pray and work to take over power by the next general elections