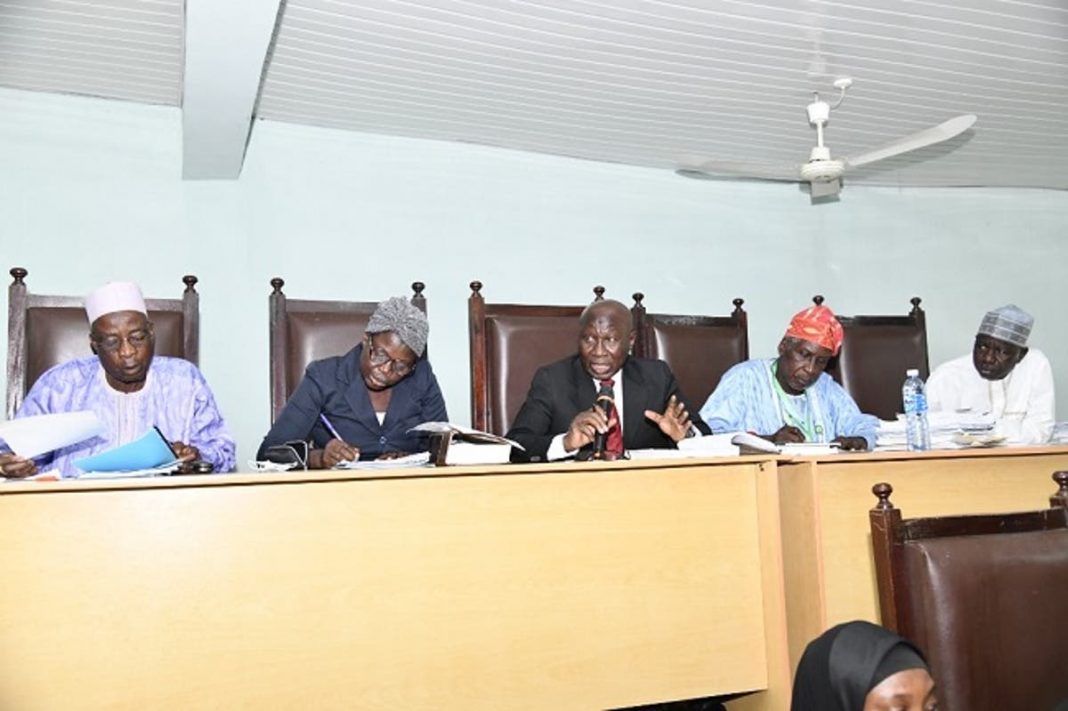 A judicial commission of inquiry set up to probe illegal sales of sales of Kwara State Government assets has commenced sitting in Ilorin, the state capital.

The Commission’s assignment was to focus mainly on acts of disposing government properties by the administration of former Governor Abdulfattah Ahmed.

In its maiden sitting, the panel attended to alleged illegal sale of Water Corporation land at Olalomi Water Reservoir, Ira road, Offa in Offa Local Government Area of the state.

Testifying before the panel, a retired Area Land Officer, Samuel Ajide, told the Commission that he was informed of a government’s decision to sell a plot originally reserved for future development at the Reservoir area; and one Alhaja Bintu Lawa,l who indicated interest to construct petroleum station on the land applied in October 2015.

Ajide, who confirmed that the sum of N7 million was paid into his personal account by Alhaja Lawal in 2015, alleged that 90 per cent of the money was paid to different government agencies, even when the application was approved for the construction a of residential building contrary to the application.

He said, “Alhaja Bintu paid the sum of N7 million to me for a portion of land at Olalomi Water Reservoir, after she applied to purchase the land for construction of petroleum station.

“The application met a brick wall when the Ministry of Water Resources insisted that the land was reserved for future purposes. But Alhaja Bintu later sought the intervention of a former member of the Kwara State House of Assembly, Hassan Oyeleke, who approached former Governor Abdulfatah Ahmed and approval was issued for a residential building.”

Alhaja Lawal, who bought the land, however countered Ajide, alleging that the witness and other persons scammed her over the matter.

She said, “Ajide approached me in 2015 that the land was to be sold. He told me he was still in the government service. I did not know he has retired. In fact, he came with government vehicles on several occasions and we bargained from N10 million to N7 million for the portion of land at Olalomi Water Reservoir Offa.

“Ajide could not produce any paper or title documents to me. I had to approach Hon. Hassan Oyeleke, who helped me secure the C of O after paying N909,250.50k in December 2018, which was charged on government land. In fact, I lost more than that N7 million to that land. Ajide scammed me because I am an illiterate.”

Alhaja Lawal also debunked the allegation that Offa community kicked against building any structure on the land as it was reserved for future purposes.

However, Alhaji Yunus Kola Olatinwo, who spoke on behalf of Olalomi Community in Offa, said the reservoir was constructed in 1964 by former Premier of Northern Region, Sir Ahmadu Bello, to serve Offa and part of Erin-Ile, but it stopped functioning in 2017.

Olatinwo said the community was surprised to see the construction of a residential building on the land, saying, the structure would affect the underground pipes.

He asserted that “the sale of the land was never acceptable to Offa people. In fact, the Olofa of Offa visited the site when he was informed of the development.”

Chairman of the panel, Justice Olabanji Orilonishe, said that the public hearing is a continuation of the fact-finding assignment of the Commission, which had taken the panel to different places within and outside the state.

Justice Orilonishe said, “Our assignment is to look into unlawful sales of government properties between May 1999 and May 2019. The bulk of the job has been done underground. We have paid visits to necessary sites both within and outside the state.

“Our sitting this morning, which is a public hearing, is to hear more evidence from those who have filed memoranda before us. We are not sitting to apportion blame to anybody.

“It is a fact-finding tribunal and our findings and recommendations will be based on acceptable evidence, which we have been able to gather in the course of our sitting.”

Two former Directors-General of Bureau of Lands, Alhaji Abdulwahab Babatunde Yusuf and Alhaji Ibrahim Salman, however failed to appear before the panel.

Their counsel, Barrister Yunus Lambo Akanbi, said they were unable to attend because of short notice.

Justice Orilonishe however directed the counsel to ensure that his clients appear on Friday to testify before the panel.

The current government has accused some former administrations of selling hundreds of government’s choice properties and land at giveaway prices and without due process, culminating in the setting up of the commission of inquiry to look into the issue, including studying the report of the Senator Suleiman Ajadi’s panel which had earlier investigated the matter.