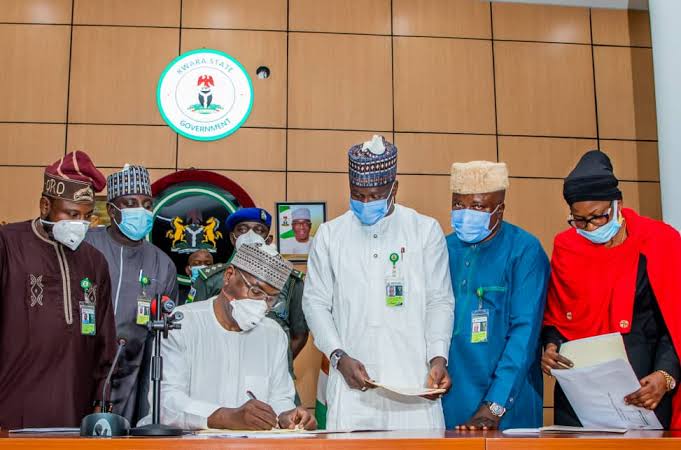 The Kwara State governor, AbdulRahaman AbdulRazaq, has signed into law a bill repealing the jumbo pensions earlier paid to former governors and their deputies in the state.

A law establishing a super high pensons for former governors mad their deputies was passed mad signed into law under the administration of Viola Saraki as governor of Kwara State, who later became Senate President and was said to be enjoying it even as a senator and subsequently, the Senate President.

AbdulRazaq had earlier in Novenber, 2020 sent the bill seeking to repeal the pensions to the state House of Assembly, which was passed into and sent back to the governor for his assent.

The governor in Ilorin signed the Pension Repealing Bill into law as well as the 2021 Appropriation Bill.

Signing the Appropriation Bill into law, AbdulRazaq gave an assurance that his administration would build on the on-going infrastructural development and increased investments in social protection and youths empowerment.

The governor had last year November sought the repeal of the law, saying it was in fulfilment of his campaign promise and a response to public opposition to the pension package that many decried as unfair.

The Speaker of Kwara State, Rt. Hon. Yakubu Danladi, who led members of the House of Assembly to the brief budget signing ceremony, told Governor AbdulRazaq that members of the public were unanimous about a need to repeal the law during the hearing.

Signing the N137.6 billion Appropriation Bill into law, the governor commended the House members for their hard work, adding, “This budget will build on the achievements of the previous years in the areas of education, health, and roads infrastructure. We are also focusing on youth empowerment, job creation, and social investments which are very critical at this point of our national life.”

AbdulRazaq said that social protection was most important at this time to prevent more people from falling into abject poverty, commending the conditional cash transfer, CCT, initiative of President Muhammadu Buhari, which is already being replicated in Kwara State.

“I was pleasantly surprised that this initiative of Mr. President is being felt in the remotest parts of the country. When I visited the communities where some women beneficiaries of the CCT used same to start the construction of schools.

“I was very happy and we thank Mr President for that. I have since refunded the money of those women and I have also approved the completion of the schools. So, we are going to continue to invest in social protection.”

Rt. Hon. Danladi had at the signing ceremony said the budget would have huge impacts on the economy of the state, especially with regards to job creation, youth empowerment, and welfare of workers.

Alaafin Builds Palatial Mansion For Two Of His Queens