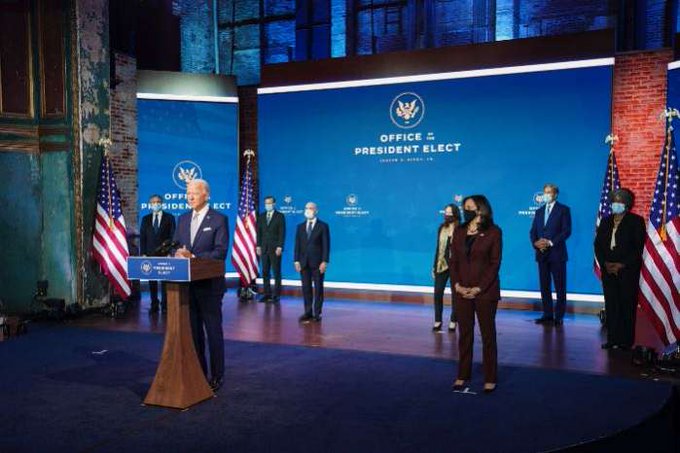 …Insists America Is Back

Biden introduced veteran diplomats and policymakers who will make up his national security and foreign policy team, saying, “America is back, ready to lead the world.”

Biden, 78, at an event in his home town of Wilmington, Delaware, presented his choices for secretary of state, national security adviser, homeland security secretary, intelligence chief, UN ambassador and climate change envoy, highlighting their decades of experience in public service.

The nominees include: Antony Blinken, Secretary of State designate; Alejandro Mayorkas, nominee for Secretary of the Department of Homeland Security; John Kerry, nominated to be the first presidential envoy for climate and the nominee for ambassador to the United Nations, Linda Thomas-Greenfield; Jake Sullivan, National Security Adviser nominee; Avril Haines, a former deputy director of the CIA, was picked to serve as director of national intelligence, the first woman to hold that post.

Kerry and Sullivan’s position will not require Senate confirmation.

Biden stressed that his nominees would help return the U.S. to its position as a global leader following the unpredictable years of the Donald Trump administration.

If confirmed by the Senate, his nominees would include the first Latino to lead the U.S. Department of Homeland Security and the first woman to be director of national intelligence.

Biden said, “I’ve long said that America leads not only by the example of our power, but by the power of our example.

“And I’m proud to put forward this incredible team that will lead by example.”

Both Blinken, Biden’s pick for Secretary of State, and Mayorkas, the future administration’s nominee for Secretary of the Department of Homeland Security, described how their families fled communist regimes in Europe and Latin America and eventually settled in the U.S.

Kerry noted that the U.S. will rejoin the Paris climate agreement on the first day after Biden takes office, and will take additional steps to combat climate change over the next four years.

Thomas Greenfield said, “America is back, multilateralism is back, diplomacy is back.”

“It is a team that will keep our country and our people safe and secure,” Biden said as the six men and women stood behind him wearing face-masks on the stage of the Queen Theatre.

He added, “It is a team that reflects the fact that America is back, ready to lead the world, not retreat from it.”

Biden said that after he is inaugurated on January 20 and Donald Trump leaves the White House, the US will “once again sit at the head of the table, ready to confront our adversaries and not reject our allies.”

Biden’s remarks came shortly after Trump suffered further setbacks in his unprecedented effort to overturn the results of an American presidential election with unsubstantiated claims of fraud.