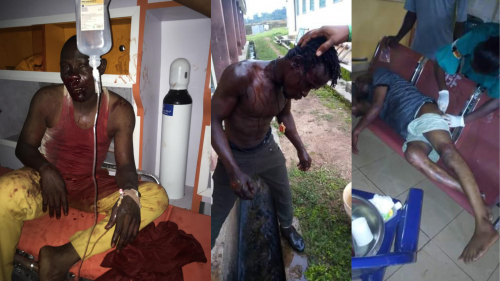 In a release issued by the Campaign Organisation and signed by Samuel Fasua, it said that “a PDP member, Hon. Amuda Sikiru, was shot in the face and abdomen during our campaign rally in Owo town by the APC thugs. The victim who is still lying unconscious was rushed to the state’s Specialist Hospital in Akure in the ambulance attached to the candidate’s convoy.

“Also wounded by the APC thugs’ bullet attacks were Messes Taye Akintufede and Seun Ogunlade. They have also been rushed to the hospital.

“Besides, some of our campaign vehicles were damaged, as was witnessed in Oba-Akoko community recently.”

It further informed that one of the convoy’s campaign trucks was completely burnt down, adding that earlier, “the same APC armed hoodlums had blocked the entry point to Ipele community, Jegede’s maternal home, and attempted to turn back the campaign team.”

It added, “This spate of attacks on our members by the ruling party in the state is threatening the peace of the state, and is apparently intended to cause violence ahead of the October 10 governorship election.

“We are calling on the Inspector-General of Police, the human rights community, and other international bodies to come to our rescue in Ondo State.”

PDP said it wants a free and fair election, but insisted that the party in power does not.