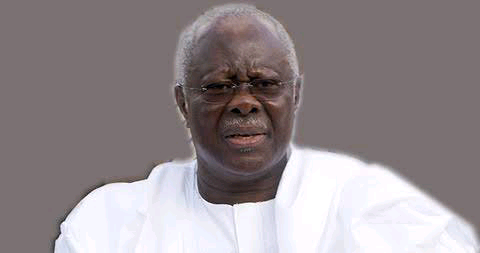 Former Deputy National Chairman of the opposition Peoples Democratic Party, PDP, Chief Olabode Ibiyinka George has prescribed the panacea to the seeming intractable anarchy hanging over the Nigerian nation like a sword of Damocles.

George, a former military governor of old Ondo State, said that fairness, truth, justice and equitable accommodation are the only panacea that can stem the precipice which Nigeria is gradually sliding into.

The Atona Oodua of Yorubaland said this while addressing a press conference in his office at Lugard Road, Ikoyi, Lagos, yesterday.

In the press statement, titled: Nigeria: The State of Our Union, George said, “We are back again at a momentous period in the history of this fragile union. We are being pulled everywhere by fissiparous forces. There is fear, ruin, banditry and freelance murderousness from all corners of our beleaguered nation.”

He decried the flow in gory sights of the blood, maintaining that “everything seems disturbed, distorted, sliding towards anarchical largeness.”

The retired military gentleman and officer, while making copious reference to the pogrom that took place at the weekend at Igangan, in Ibarapa Local Government Area of Oyo State,allegedly perpetuated by Fulani herdsmen, added, “The senseless killings, the cruel inhuman massacre of the Igangan natives in the Yoruba heartland by suspected herdsmen in the wee hours of last Sunday has brought the seething malady right to our door steps. No one is safe anymore.

“I wonder, what hate, what evil, what madness will propel anyone of sane mind to plunge into the night with weapons of war, seeking out fellow citizens for pillage and murder? It puzzles rationality. It benumbs the senses.”

Describing the Igangan massacre as a watershed in the ceaseless psychopathic killings that now pester our country without let, George said that the massacre will continue to haunt us all.

He berated the central government for losing grip over what he d received as “our collective protection,” saying, “This much the Northern Elders Forum, NEF, affirmed on Monday. The NEF is of the view that there is a weakening of will and discernment among those who constitute the national arbitrating guidance.”

George averred that the center appears overwhelmed, stunned, halted, stalled, puzzled about grappling with the Nigerian challenges, insisting that the centre can do better than it is doing, suggesting that “we must review our focus and our ultimate horizon. Nigeria must withdraw from the destructive brink.”

He added, “We have for long been divided by ethnic jingoism and sectarian bias. The withdrawal to the ethnic laager and nepotistic favoritism diminishes the national tableau.

“A nation is not about narrow irredentist fixation. It is larger. It is about common goals and shared values. It is about common destinies and common verities. Anything else is a conglomeration of indifferent, wobbling and wavering entities. It is a deviation from the normative patterns of a nation-state.”

According to George, a greater Nigeria can still be achieved, despite the current challenges confronting the nation, but that is only “when we are genuinely interested in the pivot of merit, in the illustration of excellence as the guiding principles of our national life.”

Insisting that Nigeria dangles on the precipice, struggles and teeters at the cliff edge, the Atona Oodua maintained that all is not lost, advising, “Let us listen to the wisdom of our founding fathers.

“Our pioneering Prime Minister, Alhaji Tafawa Balewa once observed that ‘Nigerian democracy should be an ethnic commonwealth which should give each constituent a fair place even if they have lost at the polls’.

“If this is not sobering, nothing else will. The predication here is about mutual accommodation, selfless embrace of our fellow citizens, the distancing from ethnic hate, the eschewing of tribal bigotry, the embrace of everything that will graduate our nation towards a more developmental and sterling country where merit determines the personal importance, where knowledge enhances the growth of the average citizen.”

The former military governor of old Ondo State berated the central government for it’s ban on global microblogging site, Twitter, saying that we live in a global village where no one, no matter how powerful, can defy the consensus of the free world.

He enthused, “The suspension of Twitter is part of the subsisting aberration. It is wrong-footed. It is hasty, unreflective, lacking in contemplative articulations. Twitter is in the world stage. It has become a permanent usage where world leaders and youths express their ideological bent. It is the utmost symbol of democratic aspirations. You don’t ban such a symbol of global exchange. You embrace it. This hasty decision must be withdrawn forthwith. We need Twitter just as the world is enhanced through democratic exchange. You do not banish plural contributions. You encourage it. This is our national challenge.”

Insisting that “we cannot continue with the old ways. The system is now devoid of stabilizing balance. We must rework it. We must push towards a renewal and a rebirth,” George added that the law enforcement agencies are often exhausted, overwhelmed, sliding into virtual ineffectiveness.

He thereforecalled for a change of vision, through a constitutional overhaul, maintaining that “the present document is the very pivot of the Nigerian malady. It lacks fairness, stripped of equitable balance, negates justice, skewed deliberately to favor a section of our people.”

He added, “If our nation must survive, if this democracy must long endure, this distorted system must give way to a new enlightened dawn.

“This must start with the whittling down of power at the center, giving the components units more enabling capability to determine their fortunes. The states must be made to be self-accounting as they freely develop the tools of economic growth and democratic aspirations. Each state should be allowed to develop at its own pace without the overbearing authority of the center.”