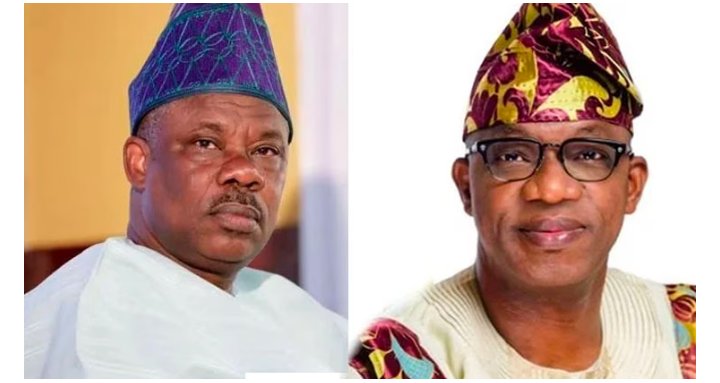 The governor of Ogun State, Prince Dapo Abiodun, has blasted the immediate predecessor, Senator Ibikunle Amosun, over a statement credited to him that he would worked against him and other All Progressives Congress, APC, candidates in the state during the 2023 general elections.

Describing such decision as unfortunate, Abiodun said that he is not moved by the threat.

Recall that Amosun, in an interview with BBC Yoruba, claimed that he would worked against Dapo Abiodun and support the ADC candidate, Biyi Otegbeye, to win in 2023.

Speaking at a combined meeting of the 16 wards in the Ado-Odo/Ota Local Government Area of the state at Ota, Abiodun added that it is regrettable that the former governor has forgotten so quickly how his preferred candidate in another party lost woefully during the last general election.

Abiodun, who also noted that his victory during the 2019 general elections became a success story despite the antics, anti-party politics of the former governor, said that he is never perturbed by the outburst of his predecessor, but is focused and looking ahead towards a successful re-election.

He said, “I watched it on television recently a former governor saying he would work for the emergence of our presidential candidate, Senator Bola Tinubu, he is definitely going to win the election. But for someone to sit somewhere and say he is going to work for a finished and successful assignment is vain.

“He is a member of our great party and he said that he will not work for the emergence of our party in our state. He is someone that could not even work to become a candidate of the party and he is saying he won’t work for the party during the forthcoming gubernatorial election. Was he even part of those that worked for my emergence during the last election? God will surprise them.”

Earlier, the chairman of Ado-Odo/Ota Local Government, Sheriff Adewale, applauded the governor for his commitment towards the development of the state, assuring that members of the party at the local government level would work hard in ensuring that the governor’s re-election and the emergence of Asiwaju Tinubu as the next president is guaranteed.