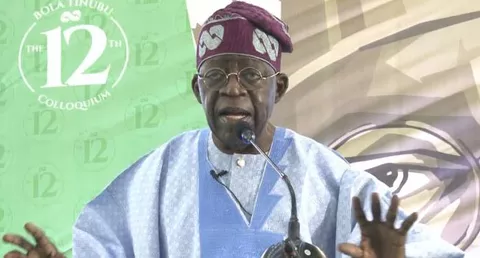 Former governor of Lagos State and National Leader of the All Progressives Congress,APC, Asiwaju Bola Ahmed Tinubu, has spoken to Nigerians from London, United Kingdom.

Tinubu said that he is very healthy and doing well in London, United Kingdom, UK.

The former governor of Lagos State and Jagaban Borgu stated this while addressing some members of the House of Representatives, who were his guests during a courtesy visit paid him in London.

Tinubu is presently recuperating in London after undergoing a knee surgery.

Speaking with the members of the House of Representatives, the Asiwaju of Lagos said, “I am well. It’s just the physio that is gruesome.”

Sources have, however, disclosed that Tinubu would be back in Nigeria anytime soon.

Tinubu has met with notable Nigerian politicians who had paid him solidarity and courtesy visits in London.

Amongst those who have visited Tinubu while recuperating from his surgery are: President Muhammadu Buhari, Lagos State governor, Babajide Sanwo-Olu, governors of Info and Ekiti states, Rotimi Akeredolu and Kayode Fayemi, respectively, some members of the Lagos State House of Assembly, led by the Speaker, Mudashiru Obasa, the immediate past governor of Ogun State, Ibikunle Amosun.

Meanwhile, many people had speculated that array of notable politicians visited the APC National Leader in relation to his rumoured 2023 presidential ambition.