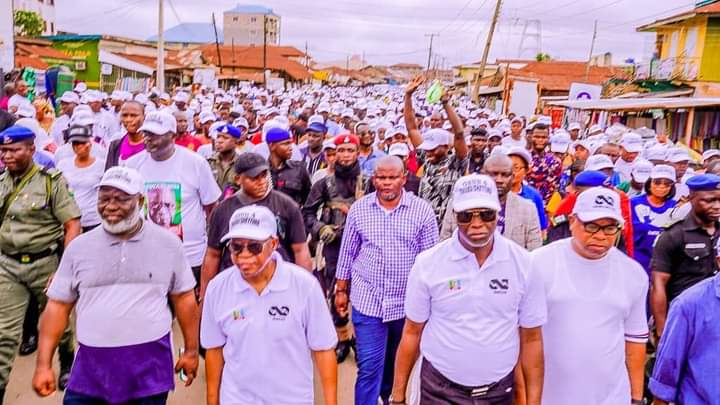 …As Osun Walks For Tinubu/Shettima

The governor of Osun State, Adegboyega Oyetola, on Tuesday led thousands of stalwarts of the All Progressives Congress, APC, in the state on a solidarity walk of about 10 kilometre, which took them two hours and 15 minutes, through major streets of Osogbo, the state capital in support of the party’s presidential candidate, Asiwaju Bola Ahmed Tinubu and his running mate, Senator Kashim Shettima.

Oyetola averred that the walk was a means of reciprocating the kind gestures of Asiwaju and to express Osun’s support as a state for his presidential ambition.

Noting that at this critical time in the history of Nigeria, there is no room for experiment on the choice of the nation’s next president, Oyetola stressed that Tinubu is no doubt, the best man for the job, considering his political pedigree and antecedents.

He said, “Asiwaju is a pathfinder and leader par excellence. He is not only a problem solver, he is a genius, a roadmap designer and implementor, who out of little or nothing, turned around the socio-economic fortunes of Lagos State.

“As a state, we declare our unalloyed support for Asiwaju and his candidature, because we know that he is the only candidate that is fully prepared with workable action plan to turn around the fortunes of our dear nation and build a virile economy that we can all be proud of.

“Additionally, he is the only man that has the required capacity and political wherewithal to reposition the country.

“I appreciate our people, who took out time to participate in the walk. It shows that we are truly ready for the growth and development we desire as a country.

“Let me urge those who are yet to collect their permanent voter cards to ensure they do so, as another window has been made available for collection.

“With this crowd, it shows that our party is still the party to beat in Osun. Asiwaju remains the candidate to beat in the presidential election.