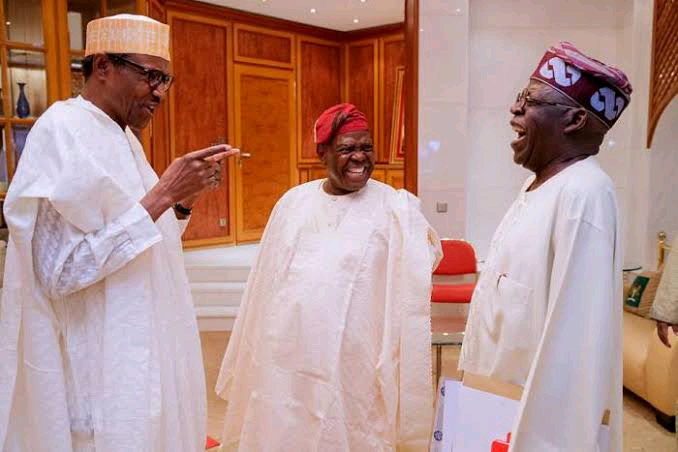 Only three reasons could make me follow Nigeria’s President, Major General Muhammadu Buhari (retd.) and his former victim, Chief Adebisi Abdulkareem Akande, into the jungle; not the President’s false claims on security, not the news that 3,125 persons were killed and 2,703 others were abducted in the North alone, in the last 11 months.

As a Lagos-born son of Osun parentage, I would rather say amen to the prayer of former Lagos State governor, Babatunde Fashola, who, in his sweaty moment at the Capitol, uttered this crucial prayer, ‘May our loyalties never be tested,’ than embark on a test for friendship inside the jungle.

Except for the Sambisa Forest, however, I’m ready to freely embark, as an errand boy, on the journey to any of the countless jungles that make up Nigeria – whenever Sai Baba and Baba Akande decide to go on the test of their friendship.

It was a confident President Buhari, who during the inauguration of Baba Akande’s autobiography, My Participations, a few days ago in Lagos, said he was ready to follow the former governor of Osun State to the jungle blindfolded. But I wonder who between these two leaders would agree to walk in front while the other comes behind in the jungle; once bitten, twice shy is a cautionary adage.

Should Sai Baba and Baba Akande choose the Sambisa Forest as the rendezvous to test their cat-and-mouse friendship, I suggest they take along with them the truthful old man from Kwara State, Baba Lai Mohammed, who had repeatedly said without blinking that Boko Haram had been technically defeated.

The first reason why I would head to the jungle with the two babas, apologies to 2Baba, is that I’ve been star-struck ever since I met them personally.

Star-struck, I always missed my way inside the palatial abode of Baba Akande in Ila Orangun, a country house like Buckingham Palace, which prompted me to ask, ‘Oluwa mi, eyi o wa po ju?’ Yes, I asked, is this palace not too gargantuan for an honest servant? Just the same way I asked where General Buhari got all the foreign exchange with which he sent six of his children to foreign universities for first and postgraduate degrees. Nobody sends their six children to schools abroad with Nigerian Army pension. Nobody! No jobless son of an honest Army pensioner owns many multi-million naira grand prix motorbikes. None!

The second reason why I think I should be taken along on the proposed Buhari-Akande expedition is my inherited hunting skills – I come from a lineage of courageous hunters in Igbajo, a city built upon the hills in Osun State. Both elder statesmen would benefit from my youth and experience in the course of their journey in the forest of a thousand demo….

I not only hunt game, I hunt news, also. This is the third reason why I want to go on the expedition with my fathers. As a journalist, I’ll cover the odyssey of the two canny friends, bringing back accurate, balance and objective news, unlike what currently obtains at ministerial lying centres nationwide.

As a dutiful son, I would be glad to carry Baba Buhari and Baba Akande’s pouches, walking in front of them, clearing jungle paths with my machete, singing ‘ijala ode’ (hunters’ songs), aiming at birds, and squirrels on iroko trees with my catapult. My fathers would walk leisurely behind me, at an elderly distance, making jest of the reactions that have trailed the great book.

I’m likely to hear, “Chief, those were satanic verses, walahi!”, and “No ooo, Your Excellency, that was a mere scratch on the surface. I’ll release a revised edition early next year.”

Then I would hear, “Tunde, rin siwaju di e si (Tunde, move ahead a bit more)” And a whisper, “These children of nowadays are very smart, he may be listening.” And ‘gaskiya ni’ would complete the dialogue.

Baba Akande’s My Participations is unlike the book I just finished reading, A Story To Tell: Autobiography of The Alamu Man, written by retired veteran broadcaster, Smollet Adetoyese Shittu-Alamu, who recently clocked 70. Shittu-Alamu’s book is professional, Baba Akande’s book is political.

In his 378-page book dedicated to God, his parents, and humanity, the Osogbo-born Shittu-Alamu tells the compelling story of a life that was birthed, nurtured and schooled in Ghana, before bestriding Oyo and Osun broadcasting worlds with excellence.

Since the release of the bombshell autobiography, incumbent and former foes of Baba Akande have been walking on hot bricks. They’ve said so many unprintable things about the Asiwaju of Ila Orangun.

Some of the personalities that have reacted to the mudsling by Baba Akande include nonagenarian Chief Ayo Adebanjo, 76-year-old Chief Bode George, 70-year-old Prince Olagunsoye Oyinlola, calling the 82-year-old Akande a liar. A cross-section of Nigerians from all walks of life have also risen to condemn the Agba Akin of Oke Ila-Orangun.

At this juncture, I’ll defend the Balogun Aramoko Ekiti, because we share something in common. Ila Orangun, Baba’s hometown, produces palm wine commercially. They drink it, too. For Ila sons and daughters, the palm wine is more potent than all vaccines combined. This is why they proudly say, “Ila o loogun, emu funfun loogun Ila;” meaning: Ila has no medicines, palm wine is Ila’s medicine.

Baba Akande and I are kindred spirits. The Jagunmolu Oodua of Ijebu-Ife knows my hometown, Igbajo, the Citadel of the Brave, whose forebears drank palm wine in bronze goblets, inheriting the sobriquet, Igbajo Iloro, omo alo agogo m’emu, which many mistaken to mean ‘an illustrious people who ring the bell before drinking palm wine’. No, nobody ever (lu agogo) rang the bell before drinking palm wine in Igbajo, we only (lo agogo) use bronze goblets to drink palm wine, like the warriors we are.

I’ll defend the Apesin of Ilashe-Ijesa, whose hometown is 12 kilometres away from mine. Baba Adebanjo challenged the Bashorun of Ilobu to name where he got the money with which he built the magnificent palace he lives in Ila. Which kain question bi dat? Baba Adebanjo should heed Bob Marley’s warning, “Who Jah bless, no one curse!” In his failed attempt to nail Baba Akande, Baba Adebanjo said the Asiwaju Ila has houses in Ila, Ibadan, Lagos and abroad, forgetting to name the five-floor highrise building Baba Akande built in the heart of Ila which is different from the palace he currently lives. Baba Adebanjo doesn’t even know Baba Akande’s late wife, Mama Omowunmi, owned an exact replica of Baba Akande’s five-floor building also in Ila. Envy is blinding.

A lot of wailers have referred to page 252 of My Participations, where Baba Akande specifically said he DIDN’T HAVE the N250,000 fee for the governorship nomination form after he became the governorship nominee of the Alliance for Democracy in 1998, enviously wondering where he got the money to build the paradise in Ila after leaving office. Baba disclosed that Chief Iyiola Omisore provided the money for the form. Omisore should gratefully thank Baba for collecting the money from him, otherwise, stones would have risen to pay for the nomination form, eni Olorun da, ko se f’ara we. One with God is a majority.

Oyinlola says he’ll respond to Baba Akande in his forthcoming autobiography; we’re waiting for him. A former Minister of Foreign Affairs, Chief Tom Ikimi, also says he’s writing a book that will put Akande in his place. We’re waiting for him, too. Ebora Owu and former President Olusegun Obasanjo, whom Baba Akande called a ‘faithless suitor’ an ‘unblinking political philanderer’, has maintained a disturbing silence. We know he’s planning to use the military tactics of surprise, but we shan’t be caught unawares.

Should I upset these rendezvousing leaders with this bad news? Or let the dead bury the dead? I’ll do what you expect.

•Odesola, a journalist and public analysts, writes from the United States of America; and can be reached via: Email: tundeodes2003@yahoo.com; Facebook: @tunde odesola; Twitter: @tunde_odesola; and TundeOdesola.com