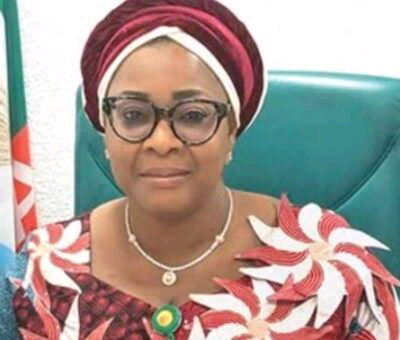 The member representing Oluyole federal constituency and Chairman of the House of Representatives Committee on Diaspora Affairs, Hon. Tolulope Akande-Sadipe has appealed to Oyo State Governor Seyi Makinde to do everything possible so as not to lose the Ibadan Inland Dry Port to Ogun State.

Akande-Sadipe, who was a Special Adviser on Projects and Public-Private Partnership to late Senator Abiola Ajimobi, during his tenure as Oyo State governor, said that her sweat and the support of her late boss secured the Ibadan Inland Dry Port for Oyo State.

Revealing that the project was conceptualized by her during the last administration, Akande-Sadipe said, “The idea sprung up on a visit to Lagos to see my mother, the traffic from trucks queuing to get into the Apapa ports led to the brainwave that this could be another economic opportunity for Oyo State, which had an advantage, based on its geographical position and the new train line from Lagos. Knowing that this would further stir up the economic revival in our beloved Oyo State, I approached the late governor with the idea and he gave his consent to commence the leg work.

“I contacted the Mr. Hassan Bello-led Shippers Council through Mr. Anifowoshe, who was based in the Ibadan office in 2018 and extensive talks about decongesting Lagos by setting up an Inland Dry Port in Oyo began.

“The rationale for Olorisha Oko was based on its location as the point where the first phase of the new train line from Lagos to the North, passing through Ibadan would terminate. That way, containers could be shipped by train from, Lagos ports to Ibadan, and further on with the completion of other stages of the project, as is the case in developed nations. I and the Bureau of Investment Promotions and Project Office team, most especially, Mr. Kunle Olusina, with the support of our principal, late Senator Ajimobi worked tirelessly to make it a reality.

“I put so much effort into making the inland dry port a reality; my sweat and support from Ajimobi secured the Federal Government’s approval of the project during the administration of late Senator Ajimobi.

“I therefore appeal to the current Peoples Democratic Party, PDP-led state government not to play politics with the socio-economic development of Oyo State.”

She noted that the Inland Dry Port would bring about 24,000 direct new jobs and also attract new investors and big corporations to take advantage of the free trade zone, saying, “We all know what that will mean to the youths of Oyo State – job creation, both blue and white-collar.”

The chairman of the House Committee on Diaspora Affairs also recalled with nostalgia that the Federal Government approved Oyo State and it became a reality.

A statement by her Special Adviser, Media and Publicity, Olamilekan Olusada, stated that the former governor of Oyo State, late Senator Ajimobi, the Minister of Transportation, Rt. Hon. Chibuike Rotimi Amaechi and the Executive Secretary/CEO of the Nigerian Shippers Council, Hassan Bello, met in Ibadan on Tuesday, May 21, 2019 during the handover ceremony of the Ibadan Inland Dry Port, IIDP, exchange of letters at the Oyo State Governor’s Office.

The statement added that by that time, Hon Akande-Sadipe had already resigned and won her election to represent her people of Oluyole federal constituency and was not present at that meeting.

The Oyo State government and the Federal Government proposed Inland Dry Port was estimated as an investment of approximately a whopping sum of $99,665,626 (N35.9 billion), which is expected to ease the pressure on the Apapa seaport and the perennial gridlock on the Oshodi-Apapa Expressway, as well as make the ardous task of import clearance more accessible to the hitherlands of the South West and the Northern part of the country.

Bello at the time said that the project would have equipment parking, truck parking, among other facilities, and would occupy 90 hectares of land, which was  provided by the state government.

The minister at that meeting expressed appreciation to the governor for making the dream of Ibadan Inland Dry Port a reality by providing the land and facilitating necessary logistics for the project.

Amechi had said, “Let me quickly add that the Lagos-Ibadan rail project would, on completion, ease the Apapa Lagos Expressway gridlock and my fear is whether Oyo State is ready for the shift of the gridlock to this axis of Ibadan.

“Containers and imported goods will now be transported to Ibadan and the rest of the country through the rail and this will aggravate commercial activities at the Inland Dry Port end.

“So, I will advise that the incumbent and the incoming governor work together and open up roads around the Ibadan Inland Dry Port to avert a transfer of the stress of Apapa Expressway to Ibadan.”

Speaking further, Hon Akande-Sadipe emphasised her worry about losing the project to Ogun State over the delays, since the change of administration; even as she further urged the current administration to do more about road infrastructure to alleviate the worries of the increased traffic expected from the port operation as it has not done enough in terms of road infrastructure, unlike the neighboring state, where Governor Dapo Abiodun, has embarked on and completed many road projects.

She averred that the project had gone far, with the bidding closed with a successful selection of a concessionaire developer, in line with Federal Government laws and regulations governing Public-Private-Partnership Procurement; sequel to which the project was adjudged viable and thus bankable and had been issued an OBC compliance certificate by the Infrastructure Concession and Regulatory Commission, ICRC, in line with the 2005  ICRC Act.

She gleefully prayed that progress will be made as she looks forward to attending the opening ceremony as a proud daughter of Oyo State.