The Minister of State for Health, Dr. Adeleke Adeleke Olorunnimbe Mamora, over the weekend commissioned rehabilitated Calabar General Hospital, assuring the Cross River State government of Federal Government’s commitment to work with the state in its desire towards achieving universal health coverage.

Speaking during the unveiling of the edifice, at the premises of the hospital, while on a working visit to the ancient city of Calabar, Mamora urged the state to work in synergy with the Federal Government, who is poised to tackle challenges in the nation’s health sector.

Lauding  the Cross River State government over the massive renovation of the Calabar General Hospital, Mamora stressed that with the massive transformation by the Ben Ayade-led administration, it means the  state is ready to achieve the much propagated universal health coverage. 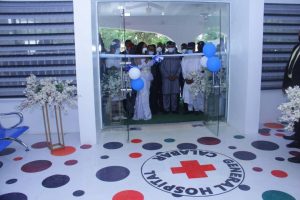 He therefore called on stakeholders in the health sector in the state to put their hands on deck to enable the state achieve the target it may have set for itself.

He said, “This hospital is truly beautiful and serene. Your Excellency, I can assure you that people will want to fall sick just to spend some time in this facility. I urge you all to continue to work in synergy with the Federal Government to fix the health challenges in the country. 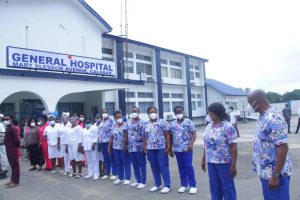 “I want to also use this medium to appreciate all the health workers, who have sacrificed their all to make the health sector functional.

“I urge you all to continue to work in synergy with the Federal Government to fix the health challenges in the country.”

In her remarks, the state Commissioner for Health, Dr. Betta Edu, stated that the Ayade-led administration would do everything within the ambit of the law to ensure that it achieved universal health coverage, assuring the Minister of State of more synergy with the Federal Government in the desire of the state to delivery better health care to residents of the  state.