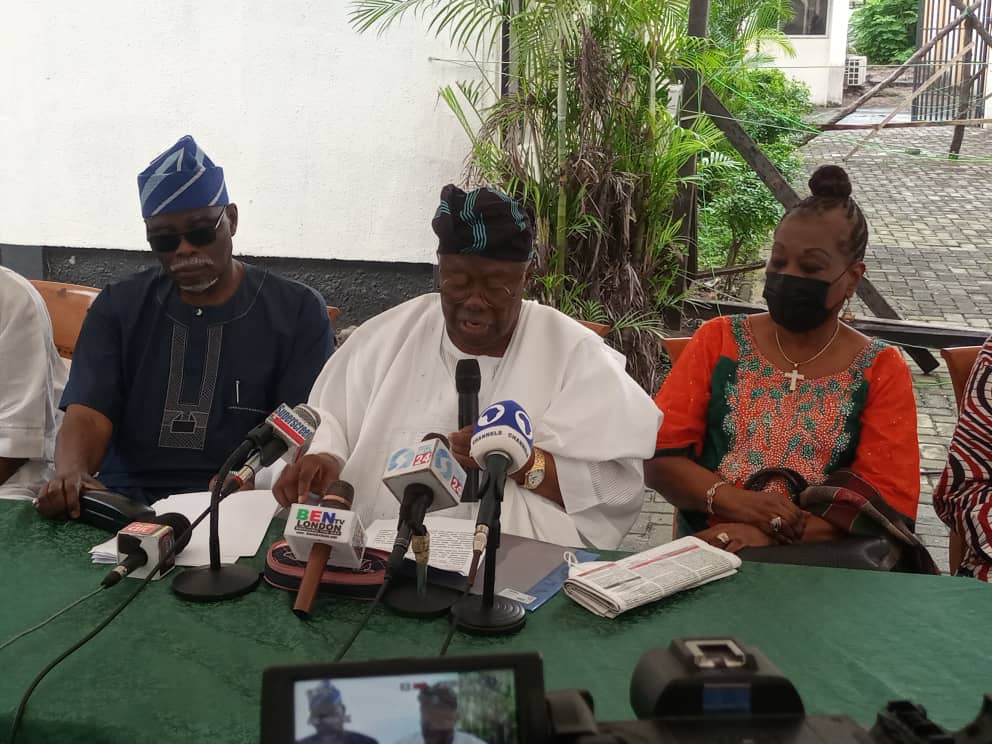 Elder statesman, critical stakeholder and former Deputy National Chairman, DNC, South, of the Peoples Democratic Party, PDP, Chief Olabode George, has sounded a note of warning that the PDP will lose the 2023 presidential election, unless the party urgently resolves the issue of alienation of a section of the country facing it by prevailing on the National Chairman of the party, Dr. Iyorchia Ayu to resign his position and allow the South to produce the National Chairman.

George said this while addressing a press conference at his Ligate, Ikoyi-Lagos office on Thursday, noting that failure on the part of the PDP to remove Ayu and replace him with a Southerner means that the party is taking a serious risk.

George urged members of the party not to allow any sentiment – ethnic or religious – to divide them.

He said, “Unfortunately, with what we are presently witnessing, our party may lose the next presidential election if we continue to disregard or fail to address the feeling and grievances of ‘alienation’ being presently experienced by the entire Southern population of this great country.

“If this issue is dismissed, we cannot expect votes from them.”

The former military governor of old Ondo State lamented that just two weeks to the commencement of the campaign season, which he believes will usher in a PDP government into Aso Rock in 2023, the party is still having issues, adding that this is what compelled him to address a ‘clear and present danger,’ which might thwart that window of opportunity afforded the PDP.

He added, “Our party must do the needful now. Anything else will be suicidal.

“Our party, the PDP, is at the precipice of a dangerous looming crisis, if pending critical issues are not urgently addressed. Party unity and inclusiveness of all members are ingredients to a viable strategy for our election victory.”

He noted that it is pitiable that some leaders are directly or indirectly, responsible for the present crisis in the party because of their flawed personal interests, which he said are targeted at disrupting the unity of the party.

Noting that it is not in his character to belittle the interest of the party, George said that when issues arise that may dent the progress of the party, one has to speak out and speak loud enough to arrest the attention of the people.

George said that in the interest of the party, Ayu should step down as the National Chairman, saying, “The onus is on him, we can’t force him to resign, he should resign honourably. Let us do what is honourable, just and fair.”

Going down memory lane, he said that Ayu had earlier promised that if the presidential candidate of the party emerges from the North, he would step down as National Chairman.

He however said that if Ayu fails to resign, he can never join the bandwagon of deceiving characters to campaign for the party.

He said, “I will not be part of it. Truth is truth, lie is a lie, let us live like civilised people.”

George stated further, “I have always fought for equity and justice for all, with respect to the constitution of this nation, and our party. I have never left our party, no matter the situation that besets me. In addition, I have no iota of tribalism in my blood, but will continue to fight tirelessly to ensure inclusiveness for all Nigerians in the political process of this country, and especially, in this party, where some of us have suffered great injustice for the fight for equity and justice for all.”

He vowed that he will not remain passive when the collective unity of the PDP is fragmented, adding, “How we collectively address the issues at stake will be a major determinant of the fate of this party at the next general elections.

“As leaders of the party, we must not pander towards ethnic affiliation, because the PDP is the only true national party. The All Progressives Congress, APC, is just a mere congregation of strange bed fellows.

“Members of our great party must be ready to seize this opportunity to move this country forward. This cannot be achieved when leaders of our party insist on peddling ugly rumours and throwing mud at each other.”

The retired Navy Commodore-turned politician maintained that the party should be seen to be pursuing noble causes and not ethnic agenda.

He enthused, “Ethnic groups in this country are at the precipice of collapse. It has never been this bad historically and Nigerians are waiting for us to change the situation for the better.

“Until this party returns to the founding fathers’ principles of unity, with equity, fairness and justice being the pedestal for any political decision taken in this party; and ensuring broad-mindedness to accommodate the concerns of all zones in this country, the PDP becomes vulnerable to disaster in the 2023 elections. Unless we are united, with equity, fairness and justice, our party may be fragmented before 2023.”

Also speaking on the issue, former Deputy Governor of Lagos State, Senator Kofoworola Bucknor-Akerele, said that she believed that “Ayu is an honourable man and he should do what is honourable by stepping down as the National Chairman of the party.”

She said, “I would like to appeal to Dr.Ayu as a friend, not to allow elements that do not wish him well for a better Nigeria to encourage him to tread the wrong path. Ayu was an honorable man when he was in the Senate, he should do the honourable thing and resign.”

When asked about the constitutional issue tossed by the PDP presidential candidate, Alhaji Atiku Abubakar, George said there is no where in the PDP constitution where what is happening in the party now is allowed.