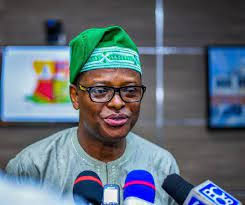 The 5.2-kilometre Gedu-Sabo-Oroki-Asipa road in Oyo town, rehabilitated by the Oyo State government, is now ready for commissioning, according to the state government.

Making the declaration while inspecting the level of work done on the road today, Tuesday, March 1, was the state Commissioner for Public Works and Transport, Prof Dahud Sangodoyin.

Prof.Sangodoyin added that rehabilitation works on the road has been completed and it is ready for commissioning by the government for public use.

He revealed that the contractor handling the rehabilitation of the road met all the specifications given to him, after proper inspection by engineers and quality assurance team from the ministry.

Prof Sangodoyi said, “The Gedu-Sabo-Oroki road which was awarded by the state government, is ready for public use. We only await desilting of the drainage system and then finalizing the road markings.

“The inspection today is just to ascertain that all the specifications given to the contractor were followed and to the best of my knowledge, we have actually checked the wearing course. It is satisfactory. The drainage system followed the specification of one meter and all other instructions that were given to the contractor. Also, our counterpart in the Ministry of Energy has installed all the electric poles.”

Addressing the initial poorly constructed bridges on the road which the governor directed to be pulled down, Sangodoyin said that the bridges are now well constructed, adding, “The one with two cells has been increased to four cells. While the one with failed wall has been properly constructed and every other instruction and specifications have been duly followed by the contractor.”

The commissioner, however, admonished road users to be careful of over-speeding, as the road is now very smooth, adding that in due course, government will observe how people speed on the road to know where to put speed breakers and every other necessary road signs.

Etomi-Wellington Self-Isolates, As 5,000 At Risk Of COVID-19