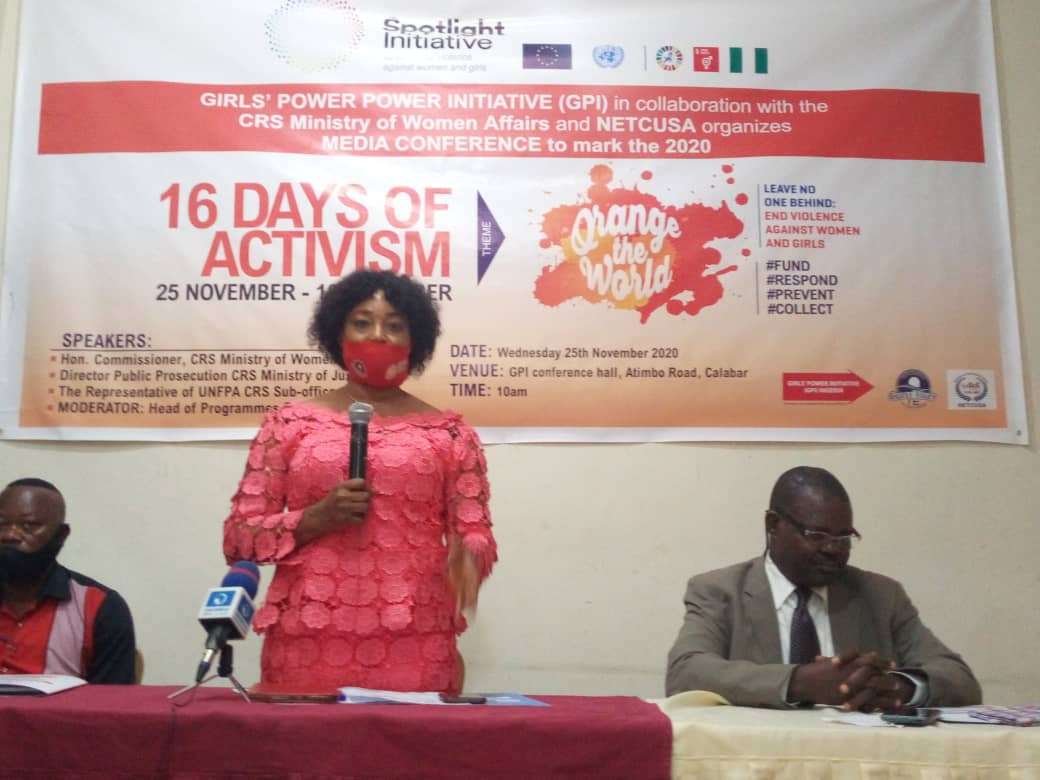 The Cross River State government is seeking collaboration with non-governmental organizations, NGOs, and Community-Based Organizations, CBOs, in the formulation of policies/laws that will not only protect women against gender-based violence, GBV, but also harmful practices, like female genital mutilation and girl child marriage.

Describing these practices as archaic, the government averred that the collaboration would also create opportunity for government to get inputs from NGOs and CBOs in the formulation of laws that can end rape, wife battery, forceful and child marriage and violence of any form against women and the girl child.

This was revealed at a media roundtable with journalists at the end of flag off of the annual 16 days of activism, packaged by GPI with support from UN women, cross River State Ministry of Women Affairs, CRSMWA, and NETCUSA, under the EU/UN Spotlight Initiative, which took place at the Girls Power Initiative Office, in Calabar,

Cross River State Commissioner for Women Affairs, Mrs. Rita Ayim, stated that the collaboration with NGOs and CBOs would go a long way in the reduction of the number of cases of gender-based violence, if not completely bring the menace to an end.

Stressing that among the challenges hindering success in the fight against gender-based violence is financial challenge, which if overcome, according to her, could lead to success in winning the war against the social malaise.

Ayim maintained that with the dwindling oil price in the international market, which in turn affected the monthly allocation to Cross River State from the federation account; and coupled with the huge debts accrued over the years, resources available to the state to fight GBV was quite lean.

She further averred that the government was not deterred, even in the face of this daunting challenge, as it has partnered with different donor agencies and CBOs/NGOs in carrying out campaigns that would put an end to this social malaise.

Calling on stakeholders to put all hands to be on deck, to win the fight against this scourge and other harmful practices against the girl child, Ayim said, “In our budget, we have provisions for supporting whatever the donor agencies are bringing, but to what extent can this funding given to the ministry to fight GBV go?

“I call on the media, CSOs/CBOs and implementing partners to come together in the fight against GBV while urging parents to stop settling cases out of the court, as it hinders the fight to stem the tide in the society.”

In his remarks, the director public prosecution, DPP, in the Cross River State Ministry of Justice, Barr Felix Ititim, stated that although GBV is a criminal offence, prosecution is sometimes challenging, due to the actions of survivors, who may not report cases or tamper with evidence, which would have led to a successful prosecution.

The DPP identified poverty as one of the challenges which sometimes render victims helpless, as they may not have the finances for the issuance of a medical certificate in a hospital, to show that someone was violated and the inability of witnesses to come to court because of lack of transportation fare.

Urging the state government to make provisions in the statutes to aid prosecution of perpetrators of GBV, Ititim appealed to communities to desist forthwith from engaging in jungle justice, as it was barbaric and archaic.

He said that with strategic leadership/technical guidance and support provided by the UNFPA to the state in the area of human right and harmful practices, the organization is able to secure a commitment from the Obong of Calabar to champion the fight against GBV and other harmful practices, stressing that 45 traditional rulers have so far been trainined on how to tackle sexual and reproductive health issues.