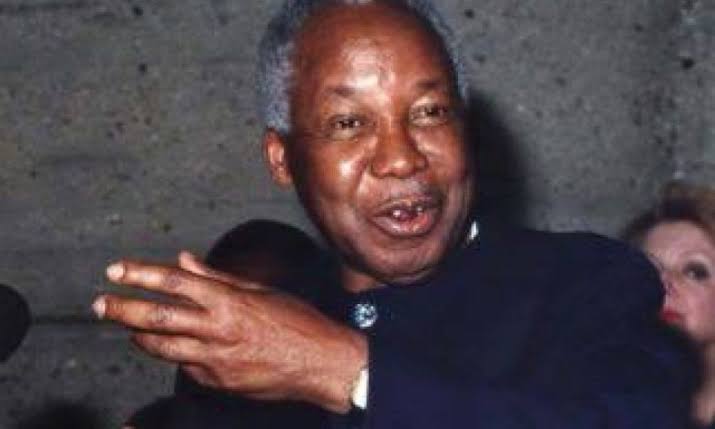 There was a natural cheerfulness about this man whose fame had long been firm, whose attainments had long been established, rooted in heroic pivot, when i was just but a toddling sprinkle there in my ancestral beginning in the native firmament of Olowogbowo.

While he had left The Daily Times, at least 15 years before I stepped upon the shores of Agidingbi and the Kakawa axis, Gbolabo Ogunsanwo’s giantism lingered beyond the portrait on the wall; it loomed in the archival liveliness of the library, stirred in the orature of the newsroom, embodied in the popular narratives of the beer parlor across the road which we dubbed the White House, because of the alabaster dash and coloring.

In loud recounting and sometimes in embellished animated fervor, we recalled his legendary attainments in the golden era of The Daily Times, as if we shared in the testimonies of his glory, as if we partook in the demonstrated largeness of his laurels. At a time most publications were struggling with a print run of some thousands, Ogunsanwo had already established a record of over 600,000 circulation figure, when he edited the Sunday Times in early 1970’s, an accomplishment no one has yet equaled in this country, and even beyond the north of the Sahara.

I met ‘People’s Gbolabo’ as his childhood friend, Chief Ebenezer Babatope, fondly called him long after I had equally left The Daily Times.

He was disarming, effortless engaging with a biting humor and satirical brilliance. He could grapple with Einstein’s law of relativity and at once probe through the Shakespearean universe with equal facility and knowledge.

He was a man of enormous, kindling enlightenment, bristling with intense intellectual vigor and assertive candor.

He spoke with certain authority and valid grace; self-assured without being arrogant, purposeful and true with firm natural certitudes that could hold his own before kings and plastic excellencies.

I never saw him unmoored, I never perceived him disconnected from a vision and destiny that appeared latched to iron and steel; steadfast and unmovable, resolved in a strength that was obvious without a scream, that was noticeable without obtrusive holler.

He took to me with spontaneous, interconnecting spirituality; stirring in that natural ebullience of wit and candor, disarming, spirited, glowing in intellectual ardor, candid as candid could be.

It was Ladbone that introduced us on that first encounter more than 35 years ago.

It was a relationship between an admirable, steering giant and a younger brethren, who looked upon him with awe, with genuine respect and a loyalty that transcended the limiting confines of journalism, reaching far into his pastoral world, where I discovered a more private and passionate disciple of the great Nazarene, who devoted his life to the purity of evangelism.

While he did not withdraw from the world of intellectual pugilism, he had vaulted far beyond the banalities of ordinary existence which was unexamined, which was unchallenged in some robust purposeful articulations.

He had become a voice in the wilderness, rousing the lost, scavenging for the hopeless, relentless and determined as the mender of the broken places and as the healer of the tortured and the scarified.

I graced his Calabar Street residence as often as I could while he would drive across the lagoon with piles of books to deposit in my house in that ceaseless pitting of ideas and the prowling into the deepest recesses of spiritual ennoblement.

He was a fearless man, unafraid of the slings and arrows of animadversion. He was genuine, sincere, dutiful, occupied in observable significations.

He was more than a mentor, more than a shepherd, more than an elderly guide and a friend. He was like an avatar; a replicated, iconic mirror of a resplendent, self-assured, self-abiding luminous soul.

He laughed heartily. He wrote with the simple felicity of a wordsmith, whose mastery of the craft was innate, pure, flowing without cluttered pretenses.

Pastor Gbolabo Ogunsanwo remains to me a vivid memory of defiance, of grace, of wit, of calm intelligence, of bristling certitudes, of questing and undaunted possibilities.

His cause is now fulfilled. His work is done. His fame is affirmed, assured beyond the confines of time. His refuge is secured in the repose of the Nazarene.