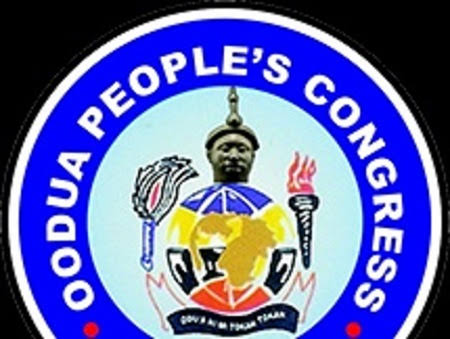 The Oodua Peoples Congress, OPC, has accused President Muhammadu Buhari of supporting foreigners to slaughter Nigerians as part of a Fulanisation agenda, warning that it would defend Yoruba land against invaders from outside, who had made the country unsafe for living, livelihood and travelling.

Speaking after a meeting of the group’s leaders at the Century Hotel, Okota, Lagos, yesterday, Deputy President to late founder of the OPC, Dr. Frederick Fasehun, Otunba Wasiu Afolabi, also known as ‘Askari,’ said that the government had shown that it preferred to defend Fulanis from outside Nigeria, instead of protecting the country’s citizens and indigenes.

The OPC also seized the opportunity of the meeting to mourn the death of first executive governor fo Lagos State, Alhaji Lateef Jakande, describing him as the most resourceful, most credible and most selfless governor the country ever produced.

The OPC said in a statement signed by Afolabi, “Baba Kekere is the undisputed father of modern Lagos. Baba Jakande was a first-class administrator, who implemented a great deal of welfarist and people-oriented programmes, many of which are still yielding benefits to the citizens 38 years after he left office.

“On behalf of all the OPC members at home and abroad, we hereby commiserate with the wife and family of Alhaji Jakande, as well as the entire government and people of Lagos State on the passage of this great and unparalleled elder statesman.”

Insisting that utterances from the Presidency and Bauchi State Governor Bala Mohammed, in support of AK-47-bearinv herdsmen has exposed a deliberate Fulanisation agenda, wherein armed Fulani foreigners entered the country on a mission of conquering the Middle Belt, the South and other minority tribes in the North in order to provide a homeland for Fulani everywhere, Afolabi said, “God forbid. We will not allow this Fulanisation agenda to succeed. Nobody will remove us from this land that is our God-given heritage and replace us with cows.”

The OPC also added that it should be noted that the Buhari government had made no effort to curtail the killings by the killer herdsmen, adding, “It is informative that the government has not deemed it necessary to mandate the police and the Army to launch operations into the forests where kidnappers are operating without hindrance.

“The highways are no longer safe, because these criminals shoot at travelling vehicles and force them to stop before marching passengers into the bush to demand ransom. They rape women and slaughter people with impunity.

“We hereby warn that if government fails to roll out the security forces and the Army against these foreign Fulani invaders, the OPC shall mobilise every physical and spiritual weapon at its disposal to defend Yoruba land and people, as well as all law-abiding Nigerian citizens living in our area.”

The group further submitted that Buhari had failed in keeping to his oath of office and a fundamental pillar of the Nigerian Constitution, which dictated that government should provide security to the people.

It said, “Section 14(2)(b) says, ‘The security and welfare of the people shall be the primary purpose of government.’ Yet the President and Commander-in-Chief has not mustered the political will to stop the country’s descent into utter lawlessness, because the perpetrators are his Fulani kinsmen from Nigeria and outside. And when people try to defend themselves, the government turns against the victims and erects all kinds of hurdles against any attempt at self-defence. Who does that anywhere in the world?”

The OPC accused the President of opening the gates for foreign Fulanis to enter Nigeria to support the evil agenda of Nigerian Fulani herdsmen.

The statement added, “Donald Trump declared America for Americans, but Buhari has declared Nigeria for foreigners.
“We shall not wait for the South to be turned into a war zone like the North-East and Southern Kaduna, where life has been disrupted and the entire place turned into one huge Internally Displaced Persons, IDP, camp.”

Breaking: Alaafin Of Oyo Dies At 83