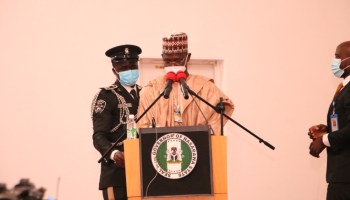 …Promises To Complete All Abandoned projects

Noting that though that lawmakers approved the total sum of N183.360 billion for 2020 fiscal year to finance both recurrent and capital development programmes of the state government, with N85.935 billion representing 47 per cent earmarked for recurrent services and the balance of N97.424billion, representing 53 per cent of the budget to service capital development, Fintiri revealed that the subsisting budget was however, revised downward to N140,072,711,860 with recurrent expenditure standing at N63,701,911,600 while N76,370,800,260 was for capital development due to global economic contraction caused by the COVID-19 pandemic.

The governor, lamenting the performance of the 2020 budget, due to the COVID-19 pandemic, said that only N14,732,754,324 billion so far has been spent on capital projects, blaming the poor capital project performance in the budget on dwindling revenue.

Insisting that his administration intends to use the 2021 budget to bring sustained development to the state, the governor added that ongoing urban roads projects and flyovers undertaken in an attempt to modernize the capital city will also get priority attention; while all abandoned projects inherited will be completed.

He said therefore, to achieve this dream, his government has proposed to spend the total sum of N16,002,714,500.00 on urban and rural roads.

Pre-occupied with developing critical infrastructure in Adamawa State, which has earned the moniker of “Master of Projects,” Governor Fintiri promised the completion of all projects initiated by his administration and all abandoned projects his administration inherited.

He therefore revealed that to achieve this tall order, no efforts will be spared; as he disclosed that plans are afoot to approach the capital market and also utilize internal loans to make it possible.

Insisting that the development of critical infrastructure which has direct benefit to people still remains a top priority for his administration, Governor Fintiri said, “During the year under review, the government carried out new urban roads and flyovers with the deliberate attempt to urbanize the city. No doubt, government has made some progress in the rehabilitation of some road network in Jimeta, Yola, Jada, Numan, Hong, MIchika, Madagali and other local government areas of the state this fiscal year, but there is yet a lot more to be done.

“Having opened into our rural areas, which is unprecedented, government will invest substantially in the maintenance and upgrading the standard of the roads, in the year 2021, for all year round usage.”