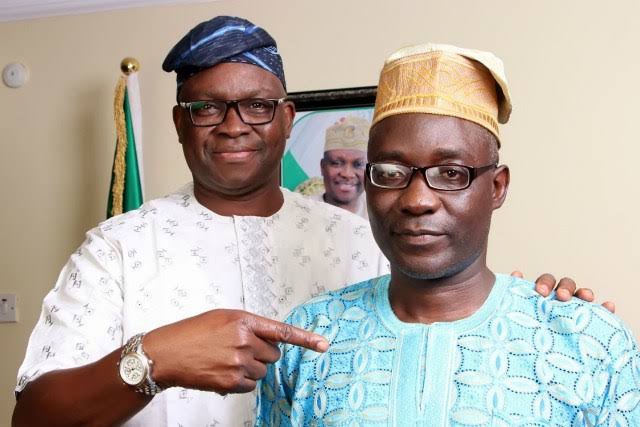 Dr. Ayodele Fayose of the Peoples Democratic Party, PDP, was governor of Ekiti State between 29 May, 2003 and 16 October, 2006, in his first term and was sworn-in as Ekiti governor eight years after in an unmistakable twist of fate on 16 October, 2014

Dr. Fayose is a bastion of inspiration, a man with the face of a lion, but with the heart of a lamb, a man of great political depth and insight; a leader of leaders and a prolific master of the political game.

One cannot really believe he is sixty, given his energetic tendency, which surpasses others in the same age range.

“Ayo,” like his name connotes, is a bundle of joy and a prism of divine radiance sent to Ekiti shores. I have always admired his tact and endless political maturity since taking over the gubernatorial mantle in October, 2014 and till now, even after his tenure.

His speech has always been inspiring and laden with the aroma of uncompromising hope and his thoughts laudable. Fayose’s charismatic smile is ever contagious, as he exhumes brutal frankness and effective leadership. I am deeply enthralled by his love for his people and his urge to transform Ekiti totally, which earned him the sobriquet ‘Architect of modern Ekiti’.

This true son of the “fountain”, though human with his own human frailities, is as strong as the unicorn, energetic, courageous, untiring, relentless, purposeful and focused. The natural ability to identify with the masses, who are clearly in the majority, has always been the source of his inexplicable endearment to the people.

He equally has the effortless capacity to steer their energies in one conscious direction.

Diamonds are forever; his track records are indelible. My boss is a peaceful embodiment full of life. A caring, loving, free spirited, principled and disciplined man, who is always there for productive advice, encouragement and participation. He is the apostle rewarding unfading loyalty among his followers.

Unfortunately, this noble gesture has been severally abused. Sycophancy is being displayed in some quarters and being made to look like loyalty. I use this unique occasion to call on The Apostle to look inwards in this regard. True loyalty shall always be rewarded. This is the vision of The Apostle; it is an enduring legacy and should be sustained.

The supreme confidence that buoys his spirit, which was instrumental to his lifting of Ekiti PDP from the valley of defeat to the mountain top of victory in 2003 through many self-financed, life-changing projects, which his Ayo Fayose Foundation Campaign movement moved to Ekiti people still amazes me.

Fayose is a prodigy in enviable contradiction and a leveler to the core. He is a reformed true Awoist, a Pan-Africanist, an emerging nationalist and a chronic reformer, who believes in egalitarianism and loathes academic racism.

He identifies the vagaries of conspiracy theorists and finds constructive criticisms presented in humble manner meaningful.

It has always been my desire to express myself to the world how lucky I am to be one of his political mentees. I cannot but appreciate him for being an incredible mentor and a wonderful personality.

He deserves so much happiness and joy in life, and I hope that the coming years ahead are full of blessings, testimonies, and political breakthrough.

I can’t exhaust tributes on him, but I just wish him a very happy birthday celebration, as he continues to utilise his God given wisdom in impacting his generation positively in the areas of his divine gifting. Amen