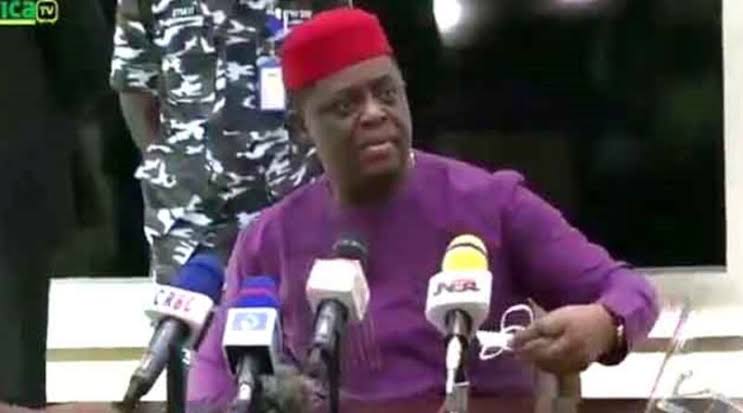 “Thank you, Mr Charles Eyo, Daily Trust correspondent in Cross River State, for seeking to know who’s bankrolling my tour of projects in Peoples Democratic Party-led states across the country.

“Well, I come from a bloodline of fearless forebears, who set sail in life using the four compass points of integrity, service, scholarship and justice. I don’t know if you witnessed the era of my progenitor, the great Victor Babaremilekun Adetokunbo Fani-Kayode, SAN, who was born in Chelsea, England, in 1921, and studied at Cambridge. My father was the third Senior Advocate of Nigeria. His robust politics earned him the popular sobriquet, Fani-Power, and he rose to the post of Deputy Premier of South-Western Nigeria in 1963.

“My grandfather, Victor Adedapo Kayode, graduated with a law degree in Cambridge too while my great grandfather had a Master of Arts degree from Fourah Bay College, which was then part of Durham University.

“My humble self; I’m also a barrister baked at Cambridge, I’m a former Special Assistant to the President, former Minister, and a leader of the PDP. The assessment of projects in PDP-led states nationwide is a selfless service I have embarked upon at a great risk to my person and a big hole to my pocket. Thank you.”

But because the boundary between Emotional Quotient, EQ, and Intelligent Quotient, IQ, was unfamiliar to David Femi Fani-Kayode, he mutated into Goliath and twaddled when the sling of Eyo’s question hit his conscience with a stone in Calabar.

Without allowing Eyo to finish his question, the 50-something-year-old politician suddenly became Aje, the Yoruba god of money, and thundered, “What type of stupid question is that!? Bankrolling who? Do you know who you’re talking to? Who can give me money for anything?”

Then, he transformed into an omniscient deity, and roared, “I could see from your face before you got here, how stupid you are. Don’t ever talk to me like that! You have a small mind…”

Later, he slipped into the cassock of a wailing messiah and lamented, “I’ve been locked up by this government, suffered, I’ve been persecuted…,” and he turned into a false accuser, squealing, “Unlike most of the politicians you follow for brown envelopes – you!…I spend, I don’t take…!”

Finally, FFK became utterly enraged and nearly turned the press conference from a vanity fair into a cage fight, when he boasted, “See me well, don’t ever try that with me again o, I have a short fuse…I will hit you hard,” and he vowed a hunger-intended vengeance as he boomed, “I will report you to your publisher.”

For those swayed by the contorted anger on the face of Fani-Kayode at the shameful event, a definition of ‘bankroll’ will expose the Cambridge lawyer’s shocking misinterpretation of a word as elementary as ‘bankroll’.

Oga Femi, ‘bankroll’ doesn’t mean ‘influence’, sir. Since that ego trip in Calabar, the nursery rhyme, “Johnbull my son, I sent you to school…” has been humming in my head.

Because Fani-Kayode went to Cambridge, I shall adopt the Cambridge Dictionary definition of ‘bankroll’ which means, ‘to support a person or activity financially’.

In other words, Eyo’s question is: “Who is supporting your tour financially?” Going by the simple definition of ‘bankroll’, Chief Fani-Kayode won’t fly into a rage and curse Eyo as he did if e no get as e be.

That Fani-Kayode blurted ‘bankroll’ eight and a half times in that short video probably confirms the weight of the word on the conscience.

Fani-Kayode’s outburst highlights the hypocrisy of Nigeria’s political elite as exemplified by President Muhammadu Buhari’s wife, Aisha, who recently went to treat neck pain in Dubai, returned to the country and told Nigerians not to travel abroad for medical treatment.

Fani-Kayode’s disdain for the Calabar journalists reveals the contempt of the political elite against the Nigerian masses, whom they have abandoned to their sad fate as our political leaders fly in helicopters over the death traps called roads, sidestep the morgues called public hospitals, by seeking overseas medical treatment and send their children to private schools instead of the pigsties called public schools.

The disgraceful outburst unmasks Fani-Kayode on the flip side of the Buhari coin. While Buhari exhibits an unjustifiable preference for foreign media over Nigerian media, FFK has a history of being a serial abuser of Nigerian media practitioners.

I won’t recall FFK bad-mouthing the correspondent of Daily Independent newspaper, Gbenga Faturoti, in Osogbo, at a news conference, over 10 years ago, among others. His penchant to deride journalists is the reason why his so-called apology has bounced off the back of public sympathy.

As a British trained lawyer, Olola Fani-Kayode knows he risks imprisonment if he says one-hundredth of what he said to Eyo, to a British journalist, but because Nigerian journalists’ dignity doesn’t matter to FFK and his ilk, he spat on the media and expected an applause.

Well, I know a ‘barrister’, who never mistreated journalists. He didn’t attend Cambridge. But he had a chamber in the Isolo area of Lagos State. It was called Fuji Chamber. His name was Sikiru Ayinde Barrister. He wished to study Law, but was entrapped by Fuji music. Barrister, aka Mr Fuji, waxed an album in 1980 titled ‘Oke Agba,’ in which he preached about the transcendence of destiny.

In the album, Barrister says someone destined to be a carpenter, but who goes on to become a lawyer, can’t achieve success in life. The album also contains a song, “Fine Bara, Decent Bara,” in which he laments the futility of excessive road tours and alms begging.

The monster album has another hit, “Afefeyeye,” in which Barrister warns against arrogance.

I can’t afford to ‘hit’ buoda Fani-Kayode ‘hard’ as he hit Eyo, because we’re both from Osun. I’m from Igbajo, the Citadel of the Brave, he’s from Ile-Ife, the Cradle of Yoruba.

I, however, wish to share with Olowo Fani-Kayode, my encounters with the late Ooni of Ife, Oba Okunade Sijuwade; a former governor of Osun, Prince Olagunsoye Oyinlola, his successor, Ogbeni Rauf Aregbesola; and the Apesin Oodua of Ile-Ife, Iyiola Omisore – all of whom I held to public scrutiny and made uncomfortable.

During the turbulence that greeted Ife PDP’s attempt to produce Oyinlola’s successor in 2010, I would call Oba Sijuwade and ask why he was engaging in partisan politics when he should be father to all political parties. Instead of cursing me, the Olubuse would deny the allegation, pray for me and urge me to visit his palace to drink champagne.

Despite being an irritant to Oyinlola’s government, the Brigadier-General showed tolerance. I once publicly asked him if he had a ritual bath inside the Osogbo tribunal hearing Aregbesola’s petition against him. I also asked him if he fathered a child from an NYSC member. Oyin laughed and answered my questions with jokes and proverbs.

At another media chat, I told Ogbeni that the All Progressives Congress, APC, wasn’t truly an ‘afenifere,’ because the APC in Ogun State failed to give Jamiu, the son of MKO Abiola and Kudirat Abiola, a ticket to the House of Representatives.

Ogbeni didn’t curse, he answered my question and burst into a song.

In 2013, as News and Politics editor of PUNCH, I had a one-on-one interview with Omisore in his Ife home and I asked him, “Why did you kill Ige?” Omisore didn’t throw tantrums, but said the allegation had become a mantra sung by opponents at election periods.

Olola Fani-Kayode, I brought out my encounters with these distinguished Osun indigenes, who are, by far, your betters politically and materially, in the hope that you may emulate their media tolerance.

Egbon, I pray that you too shall become a SAN like your father. If you’re in touch with the humble children of Chief Obafemi Awolowo and Chief SL Akintola, please, help me commend them for always staying out of trouble.

•Odesola writes from the United States of America and can be reached on: tundeodes2003@yahoo.com