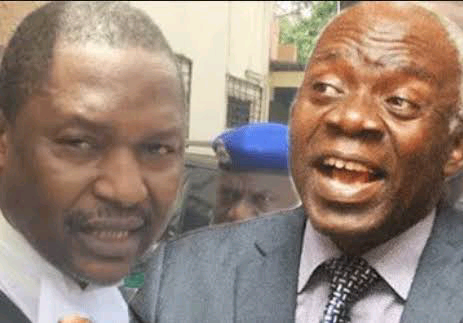 Senior Advocate of Nigeria, SAN and human rights lawyer, Femi Falana, has carpeted the Federla Government for frustrating the trial of former governor of Delta State, James Ibori, in the United Kingdom, UK, but now wants to receive the recovered loot.

Recall that Ibori was jailed by a UK court in 2012, when Goodluck Jonathan was President of Nigeria.

On Tuesday, the UK government made a commitment to return £4.2 million loot, recovered from Ibori to the Federal Government.

Recall also that the Attorney-General of the fEderation and Minister of Justice, Abubakar Malami, had said that the recovered loot would be channelled into federal projects.

So much controversies had been generated over whether the loot should be returned to the Federal Government or the government of Delta State.

Falana had insisted that the money should go to Delta State, since it was stolen from the state.

But Malami, in a counterargument, said the money would be received by the Federal Government, because the law which Ibori breached is a federal law, and not that of Delta State.

In a statement he issued on Sunday, Falana said that the Federal Government was not supportive of the prosecution of Ibori in the UK.

He said, “In fact, in utter breach of the provisions of the Mutual Legal Assistance Treaty, MLAT, between Nigeria and the United Kingdom, the then Attorney-General of the Federation, Chief Michael Aondoakaa, SAN, rejected the request to make relevant documents available for the trial in the United Kingdom on the ground of sovereignty. In particular, Chief Aondoakaar refused to entertain the request of the UK Metropolitan Police and made under bilateral mutual assistance to Nigeria on the ground that the request was not made by the Home Office.”

The legal luminary further added, “As far as international law is concerned, the recovered fund belongs to the people of Delta State, who are the victims of the corrupt practice of Chief Ibori. The British Government is releasing the stolen money to Nigeria in strict compliance with international law and not out of sheer generosity, as erroneously argued by some lawyers.”

Making reference to precedence, Falana said that the Federal Government “had handed over the fund stolen by two former governors, in similar circumstances, to the people of Bayelsa and Plateau states,” adding that Delta Staate should not be an exception.

He said the denial of the then government of Delta State that no money was missing from its coffers should not be the basis to hand over the loot to the Federal Government, since President Muhammadu Buhari claimed that Sani Abacha, the late military dictator, did not loot the country, but his government received the $321 million Abacha loot from Switzerland.

Falana continued, “From the foregoing, it is undoubtedly clear that the huge success recorded in the prosecution of the case was anchored on the collaboration between the Economic and Financial Crimes Commission, EFCC, and the Metropolitan Police. To that extent, the Federal Government,which had set out to frustrate the trial of Chief Ibori cannot turn round to lay claim to the fund confiscated on the orders of the British courts. Having regards to the facts and circumstances of the case, the Ibori loot belongs to the people of Delta State in toto under domestic and international law.

“Finally, no doubt, the former Delta State government was irresponsible to have denied that Chief Ibori looted the treasury of the state at the material time. But such denial cannot be a justification for the confiscation of the Ibori loot of over £100 million that is expected to be repatriated to Nigeria by the British government. After all, before his assumption of office as President in May 2015, General Buhari had repeatedly maintained that the late General Abacha did not steal a dime from the account of the Federal Government. But the Federal Government under the President’s watch has continued to recover the remaining Abacha loot and no one has suggested that such recovered loot be paid to the account of the United Nations or African Union on moral grounds.”

Russia Agrees To Talks With Ukraine