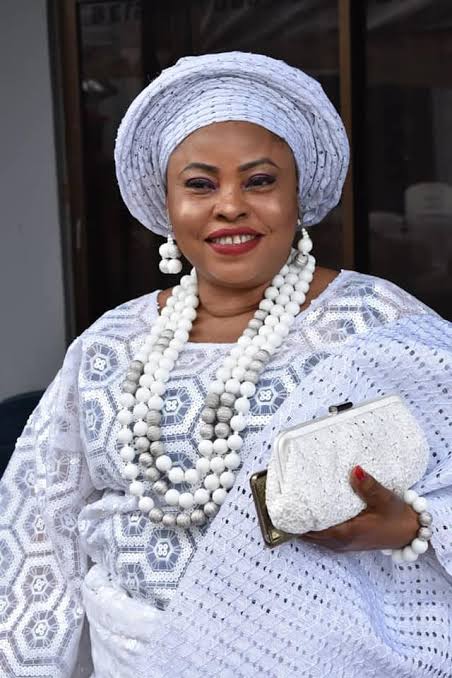 The news that Ondo State Governor Oluwarotimi Akeredolu has appointed  the first-ever female as the Secretary to State Government has gotten many people praising him, while some women rights activists have continued singing his commendation to high heavens, without knowing the hidden secret of the appointee, Princess Oladunni Odu.

The lady, Princess Odu has a lot of secrets that are hidden from the public and which her appointment by Governor Akeredolu is helping to unravel.

It is about the law of karma, that no matter how clever you are, whatever you are doing secretly will be exposed one day. This has come to play for Princess Odu, the newly appointed first female SSG in Ondo State

Many who have met this lady before would have been captivated by her sheer beauty, which the Lord has bestowed on her and unaware that beneath this awesome facial appearance is an unquantifiable solid intelligent quotient, which its percentage is rare to come by easily.

Talk of brilliance, she’s gotten it in abundance.
Talk of intelligence, she is abundantly blessed. Speak of a woman with a heavy robust sense of responsibility and precise efficiency, she has it. Looking for a dependable and reliable ally, who can oblige personal sacrifice for a venture to succeed, that is her.

Searching for a woman, who you can trust with your eyes closed, scramble for her. Grooving for a human being, who will not stab you in the back, no matter the pecuniary offers, just go for her. Think of a woman, who is not only resourceful, but a goal setter and getter, Princess Oladunni is it. Hunting for a diligent and proactive lady of substance, who combines beauty, gut and solidity in thought, she is your best choice.

Prying for a humane, humble and sensible workaholic, she is your best choice.
Looking for a lady with supreme leadership acts, deeds and thought, Princess Oladunni is your choice. Talk of panache, she has it plenty.

Humility is innate in her; and of course her second skin
Though a Princess
Odu has never allowed the blue blood running in her vein to run her brain upside down. Hardworking, laced with the temerity of purpose have been her tools for conquering and cultivating good legacies in any post of responsibility bestowed on her.
Agrarian commitment to a course with a strong determination to accomplish has been her code of conduct. Deadly loyalty and unalloyed reverence to personality order have ensured her steady rise on the ladder of success. Political consistency and submission to the party line are her hallmarks of rule.

A painstakingly  selfless lady, with a large heart to make a sacrifice for the collective good of all; an affectionate mother and a responsible wife; a passionate lady who understands the nitty-gritty of politicking at the grassroots; seasoned technocrat and super administrator, whose skills has been honed by experience both in the public and private sector, Princess Odu is it.

A barrister-at-law, who understands the dynamics of public administration and the cosmopolitanism of the private sector; a motivator par excellence, who is blessed with tremendous wits and guts of getting the best out of working force; it takes a philosopher governor of the person of Governor Akeredolu, a man who does not suffer fools, to go for a gem of a lady called Princess Odu as the first female SSG to the government of Ondo State.

Congratulations to Princess Oladunni Odu for having her secret blown out and special commendation and heavy appreciation go to Chief (Mrs) Betty Akeredolu, the wife of Arakunrin Akeredolu, the governor of Ondo State, who did not constitute herself as the stumbling stone of making Oladunni Odu the first female SSG in Ondo State.

She deserves this appreciation and commendation, because she is unlike others, who would have seen an emerging competitor for relevance in the affairs of the state in a female SSG.

Kudos to the indefatigable governor of the Sunshine State Arakunrin Rotimi Odunayo Akeredolu, for going for the best of the best, out of the best women of Ondo State, to become the first female Secretary to the Government of Ondo State.

Congratulations to the people of Ondo State for been blessed with a proactive lady of grace, a thinker and a mother as the first female SSG in Ondo State.