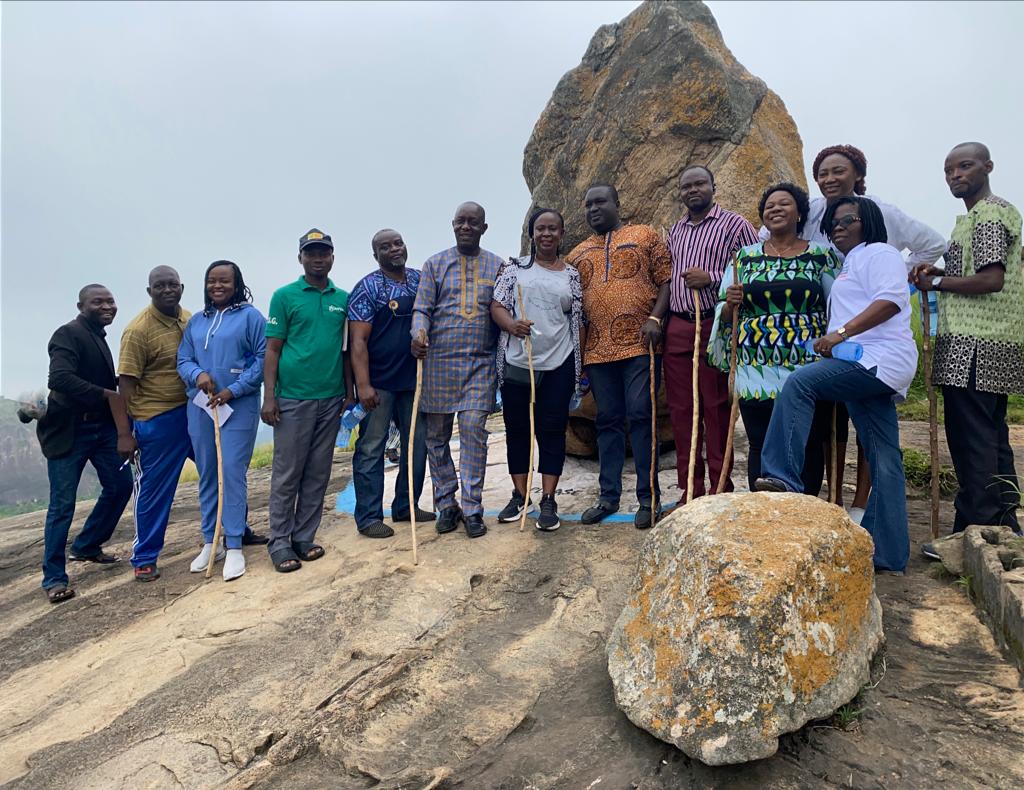 The Oyo State government has over the weekend, called on Nigerians to explore local tourist sites in the country and invest in the nation’s tourism.

Leading about 52 information officers to the Oke-Ogun site if the Ado Awaye suspended lake ad Osoogun, the hometown of the late Bishop Ajayi Crowder, the Permanent Secretary, said that the trip was organized in order to explore some of the tourists centres in the state, especially as the ministry is the custodian of the tourism sector of the state.

The Ado-Awaye Suspended Lake is the only natural suspended lake throughout the world.

Mr. Oyesola said, “The essence of this trip is to expose the activities of the state government as civil servants, which is the core function of the ministry.”

He said that the state is abundantly blessed with about 163 tourist sites all across the different zones of the state.

He enthused, “The Ado-Awaye Hill is unique; which is why it was the first point of call and it needs to be exposed to the world. As a ministry, we’ll do it. This is an exciting trip, because it gave room for interactions among officers regardless of their positions.”

He charged the state government to think outside the box on possible ways to turn tourist sites in Oyo State into a money-spinning sites, calling for partnership with investors so as to turn the Ado-Hills and other tourist sites into world-standard tourist centers.

Speaking in Araromi LCDA, the political head, Hon Timothy Olugbade Ogunleke, appreciated the visit of the delegation to the tourist center, which he described as a right step in the right direction.

He however called on well meaning Nigerians and the government to prioritize the beautification of the Iyake tourist centre, so as to encourage more tourists.

He averred, “The Iyake mountain is in need of aesthetics, for easy maneuvering of the mountain and relaxation centres for people to relax after descending the mountain.”

The team also paid homage to the Alado of Ado-Awaye, His Royal Highness, Oba Ademola Olugbile Folakanmi, Makuledoye II, who appreciated the visitation of the team to Ado-Awaye.

The monarch said tgat Ado-Awaye is answering a lot of questions as regards the economy of Oyo State, with the latest establishment of the Sorbitol Cassava Factory and the Iyake suspended lake, all in Ado-Awaye.

Oba Folakanmi thereafter presented a book, titled “Iyake Suspended Lake, the Pride if Africa,’ written by him to the team.

The team visited Osoogun, the ancient town of the late Bishop Crowther, famous for the translation of the English version of the Bible to Yoruba language.

In the words of Chief Bola Bambi, the Basorun of Osoogun town, the Baobab Tree to which the late Bishop was tied is synonymous to the town, such that if rain refuse to fall and prayers are offered to the tree, rain will fall.

Chief Bambi therefore called on the state government to kindly see to the challenges bedeviling the community, such as lack of good roads and electricity.