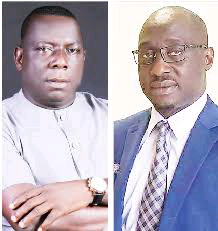 The stakeholders, who claimed that Jarigbe is the authentic winner of the December 5, 2020 Cross River North senatorial by-elections, stated that all they are asking for, is for justice to prevail in the matter.

Speaking through the
Coordinators of Northern Renaissance Assembly SSDYRA/ Movement for the Restoration of Cross River PDP, Raymon Takon, Omang C. Omang Esq. and Emmanuel Agba respectively, they urged the Senate President, Dr Lawan to bann Dr Stephen Odey from attending plenary sessions, stressing that it is illegal for Dr. Odey to be attending plenary session since the apex court in the land, the Supreme Court has invalidated his elections into the Senate.

Stressing that since the December 5, 2020 by-elelction, Rt Hon Jarigbe and Dr Odey had been engaged in a legal tussle over who is the authentic candidate of the Peoples Democratic Party, PDP, in the election, the stakeholders insisted that in as much as the apex court had invalidated Odey’s stay in the Senate, he should quit the Senate to pave way for Jarigbe’s swearing in.

The stakeholders lamented how the battle between Odey and Jarigbe has fictionalised the PDP, both at the state and national levels and therefore urged the Senate President not to tolerate Odey’s stay in the Senate, so that Jarigbe can take his right place in the upper legislative chamber

Odey’s detractors appealed to the Senate President to allow justice to prevail by swearing-in Jarigbe, who according to the stakeholders is the only one qualified to represent the senatorial district as declared by the Supreme Court.

This appeal is coming barely six weeks after the Supreme Court, presided over by Justice Tijani Abubakar, in Suit No: SC.9/2021, between Dr. Stephen Odey vs Chief John Alaga, Jarigbe Agom and INEC, nullified Odey’s election.

The stakeholders stressed that the judgment delivered by Abubakar, JSC, on Thursday, February 25, 2021, “struck out the appeal for reasons of incompetence and adopted the reasoning and conclusion reached herein to sustain the 2nd Respondent’s (Jarigbe) preliminary objection with an order striking out this appeal,” and called for immediate swearing in of Jarigbe as the senator representing Cross River North.

Raising the alarm over the turn of events and accusing the Senate President of failure to the the right thing, the stakeholders stressed that they are surprised that Odey is still paradinf the Senate chambers to the extent of attending plenary session even when various courts had ruled in favour of Jarigbe, wondering why Odey is still been allowed to attend plenary sessions in the Senate.

The statement of the stakeholders, made available to newsmen in Calabar, on Wednesday, the stakeholders averred that based on the judgments of the Appeal Court and the Supreme Court, Odey ceased to be the senator representing Cross River North at the red chambers.

They further argue that the fact that INEC has obeyed the judgment of the courts by issuing Certificate of Return, to Rt. Hon. Jarigbe Agom Jarigbe, this automatically invalidates the CoR earlier issued to Odey, after the by-election.

But in a reaction, one of Dr. Odey’s media aides, Mr. Ojeka Paul, said that he is not prepared at the moment to join issues with the stakeholders, who he described as alarmists and enemies of progress, who take delight in raising false alarm at the slightest opportunity.

He said that Jarigbe neither contested nay primary or main election for the senatorial district, which he so claimed to have won.

Also speaking on the issue, a youth leader in one of the wards in the senatorial district, Charles Odama, insisted that Jarigbe was defeated “hands down” in the elections that took Odey to the Senate, stressing that assuming he has the power to cancel the elections, he would have done so and asked both gladiators to return to the field and see if Odey won’t beat Jarigbe again as he did in the December 5, 2020 elections.

He said, “Let’s go back to the grass root and find out if Jarigbe contested any elections or primaries. He never, he ran and abandoned the contest, only for him to be declared winner by the court. Is election won in court or on the political field?

“Odey is in Senate and remained the authentic senator and nothing else. Why not allow the court to do their work instead of trying to drag the Senate President, who is innocent in this matter?

“As far as I’m concerned, those raising the false alarm have no power to prevail on the Senate President to do their bidding by stopping Senator Odey from participating in plenary session of the Senate. These people are just too afraid of Odey’s soaring popularity.”

Asked if he were a lawyer to be speaking in favour of Dr. Odey, Odama said, “I know am not a lawyer; its the reason I said they should allow the law to take its course, rather than tell President of Senate what to do.”