…Congratulates Her For Obeying God’s Commandment

The Iyalaje Oodua of Yorubaland, Chief Mrs Toyin Kolade, has congratulated the founder of Love of Christ Generation Church, Pastor Esther Ajayi, for harkening to the voice of the Lord by establishing a grand place of worship in Yorubaland, describing the worship centre one which is “of spiritual and economic blessings to Yoruba land.”

The Iyalaje Oodua described the act as “a sublime submission and total obedience to God’s commandment, which depicted Mama Esther Ajayi as a reincarnation of one of the prophets and prophetess of old-time religion, who listened and acted solely on divine instructions for the benefit of their generations and the globalisation of the gospel at their own expense.”

Chief Mrs Kolade, who said this while answering questions from journalists immediately after the grand opening of the Love of Christ Generation Church in Lekki said that “obedience to a divine or spiritual order is not an easy task, as it mostly behoves the hearer to abdicate his or her comfort zone for a blank promise based on faith.” 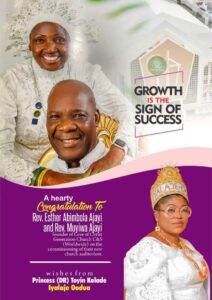 The generalissimo of Yoruba commercial activities remarked, “However, each of the options has its reward, both in the physical and in the spiritual realms, according to Deuteronomy 11:26-28, which sums it up that blessing is the reward for obeying the voice of the Lord, while a curse is the consequence of the refusal to heed divine instruction.”

The Iyalaje Oodua pointed out that “we are all witnesses and partakers of the divine reward of Mama Ajayi’s obedience to God’s commandment, to leave London and move to Lagos, Nigeria, by the avalanche of eminent and distinguished personalities, strong pillars of the spiritual fortress in the world and men and women of means, who are here today. It is an awesome testimony that whoever listens and harkens to the divine voice will earn blessing, and not curse.”

She pointed out that the planting of the church by Mama Ajayi in Lekki and the relocation of its headquarters to Nigeria is not only a spiritual blessing to Yoruba land but an economic stimulus to Nigeria via religious tourism.

Chief Kolade said that the Love of Christ Generation Church would turn Nigeria into another pilgrimage centre of the world, as “Mama Esther Ajayi ‘s spiritual light and divine calling is of intercontinental relevance, which will lure millions of Christians from all over the world to scramble to Lekki for spiritual guidance.”

She added, “Olodumare is one and has no rival; although the means of getting to Him, the mode of worshipping Him and the means of communication with Him differs according to clime and climate. But the fact remains that either East or West, North or South, white or black, traditional or orthodox religion, Olodumare, who is the decider of our fate, is the Controller of fortune, wealth and our being and we must worship Him in whatever way we are inclined or tutored in faithfulness.”