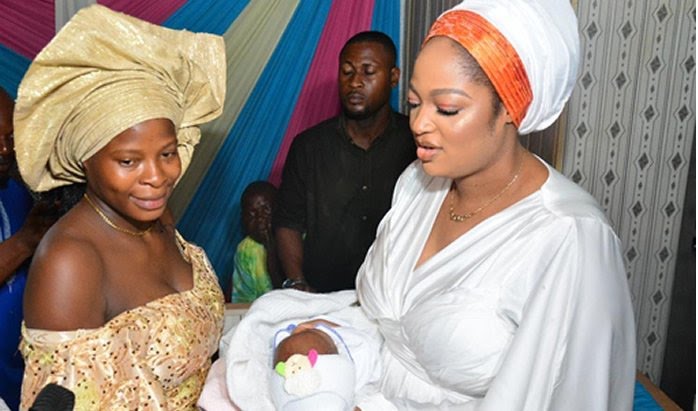 #EndSARS protester, Kemisola Ogunniyi, who had spent eight months in detention and was delivered of a baby boy penultimate Wednesday, had been told that her baby is a special.

Making the declaration at the christening of the baby on Wednesday in Akure, the Ondo State capital, was the wife of the Ooni of Ife, Olori Naomi Adeyeye Ogunwusi, who made a grand appearance at the ceremony with her entourage.

Recall that Ogunniyi was arrested and charged to court alongside three others for allegedly vandalising a property belonging to the Ondo State chapter of the All Progressives Congress, APC, during the October, 2020 #EndSARS protest in Akure, and was remanded in the Nigeria Correctional Service Centre in Akure.

The state High Court, sitting in Olokuta, Akure, granted her bail on humanitarian ground on Tuesday, in the sum of N10 million.

The christening of the child held at Vera Christian Assembly, Ayedun Quarters, Akure, had among others in attendance, the wife of the Ooni of Ife, Olori Naomi Adeyeye Ogunwusi, who said she came to felicitate with mother and child, because she was touched by the circumstance surrounding the birth of the baby.

Olori Ogunwusi wpresented the boy with baby items, toiletries and foodstuffs for the baby’s family.

Olori Ogunwusi said, “When I heard the news, I was touched to hear that the lady gave birth in the prison custody. That was why I am here today (Wednesday). The baby is a special boy. I will stay with the family. Kemisola should see me as her mother, her sister and her friend.”

Speaking, the mother of the baby, Kemisola, who could not contain her tears of joy, expressed appreciation to all who were involved in securing her bail after the baby was born.

She said, “I thank God for my life and I also appreciate the government and all who participated in my case. God will be with all of you.”

Kemisola’ mother, Mrs Felicia Ogunniyi, who said she was not aware that her daughter was pregnant, appealed to the state government to assist her daughter in ending the legal matter.

Meanwhile, Kemisola’s lawyer, Tope Temokun, has also announced that a UBA bank account has been opened to support Ms Ogunniyi and her baby. The account name is Ogunniyi Kemisola Alaba, while the account number is 2205643040.