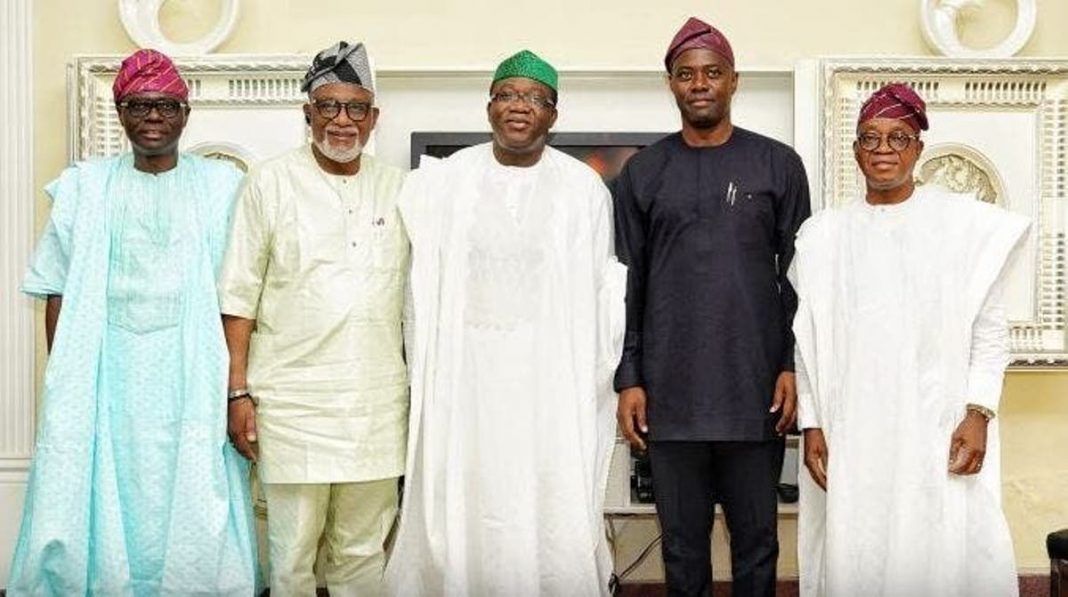 Governor’s of the South West states on Sunday noted that the peaceful #EndSARS protest was hijacked by certain people to execute what they described as a destructive agenda.

The solidarity visit came on the heels of the wanton destruction of lives and properties in Lagos State during the violence that trailed the peaceful #EndSARS protest.

Also on the entourage was the Chairman of the Nigeria Governors’ Forum, NGF, and governor of Ekiti State, Kayode Fayemi.

Other governors present were Governors Seyi Makinde of Oyo State and Gboyega Oyetola of Osun State.

The governors were accompanied by ministers from the South West, including Minister of Works and Housing, Babatunde Fashola; Minister of State for Health, Olorunnimbe Mamora; and Minister of Interior, Rauf Aregbesola.

Earlier at a press briefing, Governor Akeredolu noted that the unfortunate occurrences of the past few days in Lagos State had impacted negatively on the whole of the South West region.

He siad, ”It is disquieting, to assert the least, that a protest, widely acclaimed as peaceful and purpose-driven, has been hijacked by some people, ostensibly to execute a destructive design.”

Insisting that recent developments had shown that there might have been other reasons for the continued, well-coordinated and funded protests, Akeredolu said, “The spread of fake news and videos, which followed an allegation of shooting by some soldiers with a claimed heavy casualty figure at the Lekki Toll Gate, Victoria Island, Lagos, is primarily responsible for the subsequent loss of lives and property.”

While commiserating with the families of victims of the violence across Lagos State and slain policemen, Akeredolu prayed that the Almighty grant them the fortitude to bear the avoidable losses.

He said, “We also note, with much pain and sadness, the vast and spreading destruction of property belonging to notable individuals and vestiges of our collective patrimony and pride.

“We commiserate with His Royal Majesty, Oba of Lagos, Oba Rilwan Akiolu, on the sacrilege committed at his palace and condemn in no unmistakable terms the vile attack on Asiwaju Bola Ahmed Tinubu and destruction of businesses where it is believed he has interest, TVC and The Nation to mention a few.”

The governors expressed worry over the refusal of the military authorities to make definitive statement on the Lekki Toll Gate incident, days after the unfortunate incident took place.

They said, “We note, with great relief, the confirmation by the governor that no fatality was recorded at the Lekki Toll Gate incident based on visits to hospitals, mortuaries, both private and public.

“There were no doubt different levels of injury to persons arising from the incident at the Lekki Toll Gate. Consequently, we insist that full investigation be conducted to ascertain the veracity of the news items liberally circulated by some local media.

“It is becoming very clear that the conflagration may have been caused by deliberate deployment of ‘weapon of mass confusion’ apology to Dr. Ope Banwo. The attendant damage was extensive and massive.

“We enjoin our youth to rise up to defend our land and people against the diabolical incursions ravaging our space. What do we stand to gain destroying ourselves? We cannot continue to fold our hands and watch our heritage destroyed and our people suffer. We must engage, constructively, all those whose dubious solutions to a social problem is the descent to anarchy. We appeal to them to ‘Calm down.’”

The governors also commended Governor Sanwo-Olu for his administrative acumen, while noting that his patience and understanding in the face of unwarranted provocation by agents of darkness was also comendable.