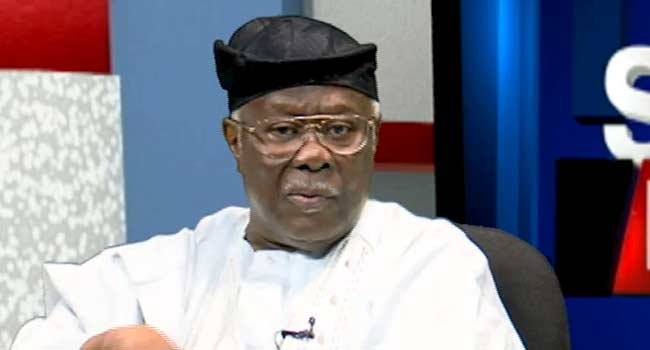 Former Deputy National Chairman of the Peoples Democratic Party, PDP, Chief Olabode George has called for the dismantling of the Ikoyi Link Bridge Toll and Lekki Toll Gate, where protesting youths were allegedly shot; even as he made other demands on the state government.

Speaking at a World Press Conference at Ikoyi – Lagos on Monday, George said, “Let me advise that the two toll gates at Lekki should be dismantled entirely. The toll gates are now sacred grounds where innocent lives were cut short abruptly.”

Other demands made by the former chairman of the board of the Nigerian Ports Authority, NPA, included the scrapping of what he described as outrageous pension for former governors of Lagos State, destallation of Shade Tinubu as the Iyaloja of Lagos State, and cancellation of the advert signage contract given to Seyi Tinubu.

He said “At the Admiralty Circle Toll gate, specifically where bullets rained on that Black Tuesday 20 – 10 – 2020, a monument should be erected as a permanent memorial to honor the young men and women who stood up in peaceful protests against the ills in our society.

“The protesters were lawyers and doctors. Many were unemployed. There were artistes and musicians. There were Yorubas, Hausas, Ibos and all ethnic stripes that make up the Nigerian federation. There were Muslims, Christians and many various faiths.

“They ate together. They slept on that cold asphalt both in the rain and in the soaring sun. There were no discriminations. There were no quarrels of any kind. They raised their own money among themselves. And more importantly, they demonstrated admirable accountability that is lacking in the larger society.

“They called themselves the ‘Sọrọ Soke’ generation. They have spoken out loud and clear. Yes, we have heard them. And their brave deeds can never be forgotten.”

George said it is rightly observed that when Lagos sneezes the rest of the nation catches cold, adding, “This is where we are now. The seeds of degeneration sowed in Lagos is now sprouting across the country.

“And what is the response of Tinubu to the premeditated killings at the toll gates? He strutted into the Governor’s Lodge gloating, laughing, joking, sniggering, boasting that he is still the Ashiwaju of Lagos and the Jagaban to boot. He even mocked the wounded and the dead, questioning why they were there. And this is the man who falsely claims he is a Lagosian.

“His reaction is most insensitive, cruel, reprehensible and wicked. He never once commiserated with the families of the bereaved. He never showed empathy for the wounded and the dead. His sole interest is the cash cow which the toll gates have become.

George, who is also the Atona Oodua of Yorubaland added, “Amid the decadence, the rot, the filth, the pains, the anguish and the deprivations, Bola Tinubu and his league of cronies are mocking us all. Well, the mockery will haunt them too when they are all docked at The Hague. The great Greek Philosopher and play wright, Sophocles, is right: ‘Whom the gods would destroy, they first make mad.’
Indeed Tinubu is the one that has serious questions to answer. We know his son, Seyi, who controls all the advert signage in Lagos State is also the owner of the advert company that placed the billboard on the toll gate.”

George said question should be asked “on who ordered that the lights be switched off before the killer squads came? Who ordered the removal of all the cameras from the toll gate? Since the Military High Command has denied any involvement in the killings, who aided and abetted the cold-blooded murder of peaceful protesters? Who has the greatest interest in the continuation of the two toll gates?

“These are the questions that the international community should demand answers from Bola Tinubu himself. From his irresponsible and reckless bluster and his depraved triumphalism, Tinubu has betrayed a complicitous relief that the peaceful protesters were chased away and hacked down in cold blood. Tinubu is obviously a person of interest at the International Criminal Court at The Hague. He can run but he can’t hide.

As a way of fulfilling the demands of the youths, George said, “Let us start our own Marshal Plan by creating huge public work programmes to absorb the unemployed. After the devastation of World War II, President Harry S. Truman put his nation and Europe back to work through massive public work projects. Roads were constructed, rail-lines sprouted everywhere; dams, bridges, housing projects, electrical grids and various public works arose everywhere, removing millions from the unemployment rolls. Skill acquisition programs that used to be the hallmark of FIIRO should be resuscitated.

“When our youths are employed, when obscene pension schemes of immediate past Lagos State governors are scrapped, when everyone is given equal opportunities to exert his God given talents, when the ogre of nepotism and cronyism is ended, we would have satisfied the demands of the youth.”

George further said, “Let me reiterate the irreducible minimum acceptable to placate the angry, restless youths in other to restore peace, fairness and equity in our state.

“Alpha Beta, Leki Concession Company should be scrapped. The advert signage monopoly given to Seyi Tinubu should be withdrawn forthwith; the Iyaloja title should be withdrawn from Shade Tinubu and be given to the individual who deserves it according to tradition; the NURTW, which has become the militia wing of the APC in Lagos State should be reorganised and removed from the ambit and the control of political actors; the outrageous pension scheme for the immediate former governors of Lagos State should be scrapped; the prodigal allowances given to members of the Lagos State Assembly should also be scrapped; there should be free education from primary to secondary levels in Lagos State and free healthcare services must be given to the needy.”

George added, “Finally, let justice prevail over the graves of the Lekki Toll Gate heroes and the millions of the members of the ‘Sọrọ Soke’ generation still wasting away in our cities and the slums. May God bless this nation and heal our wounds.”