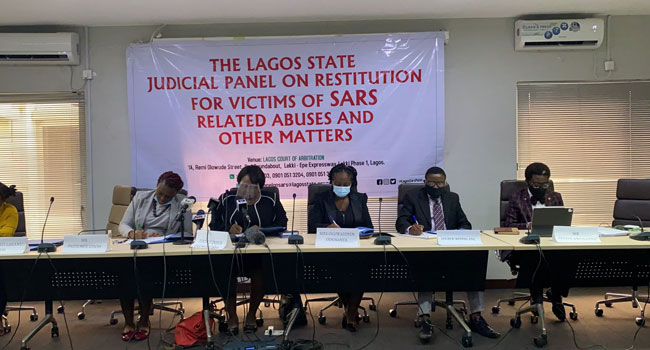 The Judicial Panel of Inquiry and Restitution set up by the Lagos State Government to investigate cases of police brutality and extrajudicial killings sat for the 12th time on Tuesday.

At Tuesday’s hearing, four petitioners were expected to give their testimonies, including a further hearing by Mr. Okoliagu Abunike, who had alleged that he had lost two of his teeth in an encounter with officers of the now-defunct Special Anti-Robbery Squad, SARS. Others include a lawyer, Olukoya Ogungbeje, Mr Basil Chetal Ejiagwa and Francis Idum.

The session started with the cross-examination of Mr Abunike, who is being cross-examined by the counsel to the police, Emmanuel Eze.

On October 27, Abunike, a father of five, told the panel that in 2012, The Federal Special Anti-Robbery Squad, FSARS, operatives detained and tortured him for 47 days at their Ikeja office, without trial.

He revealed that he had been invited to a police station in the Ojo area of the state for some clarification over the disappearance of some goods at his former place of work, adding that upon honouring the invitation, he was immediately arrested and was handed over to the Special Anti-Robbery Squad in Ikeja.

He said, “I was like what is going on? And they said there was a complaint against me from my boss that something happened, and goods got missing.

“I said well, my boss has to come here so that we can iron out whatever issues, because something like that has happened before and they called me to go back and resume (work), that it was a mistake on their system. After we waited for the whole day, nothing happened. The next day, they brought me back to Ojo from Ikeja, with so much threats.

“My boss did not even show up, then they started beating me, calling me a thief, fraudster and all that. They paraded me round the whole of Alaba International Market, they asked me to stand straight in their vehicle, showing my face; they even took me to my church.”